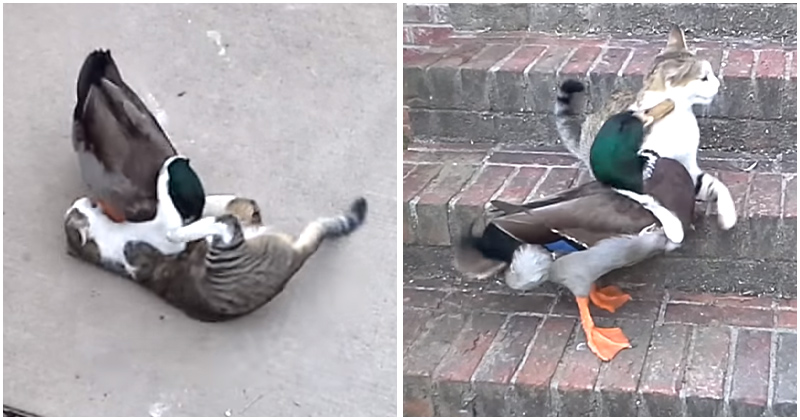 Friendship is undoubtedly one of the best gifts in this world, it knows no boundary. Even different species of animals can get along well and create incredibly strong friendships. If you need more reasons to believe in those unique bonds, this adorable video is right here to brighten up your day.

Meet Daisy the duck and Winston the cat, an unlikely duo who loves to teases each other all the time. According to their owner Tom Bonin, Daisy and Winston are best friends and the way they often express their love towards one another is also hilarious like these endearing creatures themselves: they fight every day.

In the video, Winston is just chilling in their garden when Daisy approaches him and starts to provoke the tabby cat. Of course, Winston just can’t let the duck do whatever she wants, he begins to rise up and the pair immediately get into a rib-tickling battle.

The funny thing is Winston tries to break free several times during their fight, but Daisy simply doesn’t want to let go. Okay, who says cats are aggressive and ducks are often tame and mild? These quick-witted buddies are proof that stereotypes aren’t always right and all critters have their own personalities that we can’t judge by their species or appearances.

After almost three minutes of nonstop wrestling, Winston just decides he has absolutely nothing to do with that annoying gal. The cat gives up real quick and runs away in the blink of an eye, leaving the confused Daisy waddling like crazy behind. Such a humorous pair!

Let’s take a peek at the amusing scene:

In fact, Daisy isn’t always the troublemaker in the house. Sometimes it’s Winston who takes the mischievous role, but if truth be told both of them are cute and funny in their own way.

Here is another delightful moment of the unusual besties:

Please share this weird yet joyous friendship with your best friends!

Sneaky Cat Raids The Fridge Through The Crack In The Door

20 Photos Proving Pets Are More Fragile Than We Think

15+ Photos Showing That Pets Make Our Lives Happier And Healthier

This Dog Is Taking Over The Internet With His Musical Talent

10+ Animals Who Act Just Like They Star In Movies