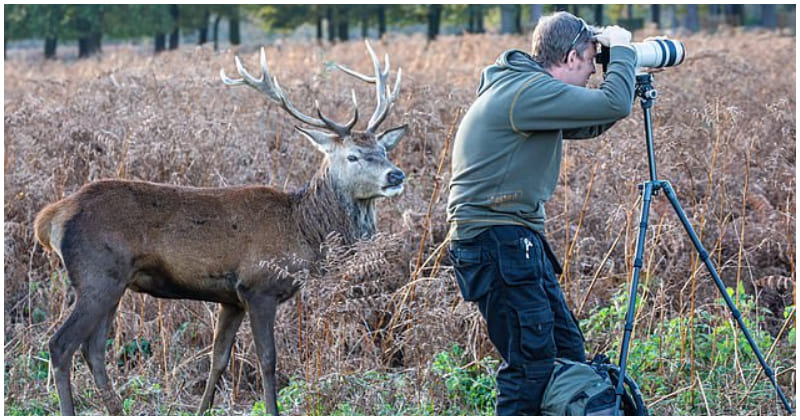 Each wildlife photographer desires to capture unique moments of wild animals. This requires a lot of patience and of course, depends partly on their luck. However, some unintentionally miss this once-in-a-lifetime opportunity. They don’t realize the existence of the animal near them until they disappear into the bush.

This wildlife photographer is among the unlucky ones. He was photographing at Bushy Park, west London. He had his camera lens facing the wrong way when a wild stag popping up right behind him. The “sneaky” animal even didn’t give the man any clue although it stayed there for a few minutes. “Psst…….I’m right behind you! but you just miss it”. If the photographer had turned around just a second, he would have had an incredible encounter with the wild stag. He didn’t notice the presence of the red deer. It was not a perfect day to work with his lens!

Interestingly, Roger Clark, a keen wildlife photographer nearby captured those incredible moments into his camera. Both the man and the wild tag appeared in his shoot. “We spotted a man with a camera mounted on a tripod intently focused on some deer activity in the ferns in front of him unaware of the large animal behind him,” said Roger.

He added: “Given the angle, I was positioned, it looked like the stag was nuzzled up to pick a pocket from his jeans so I took a photo as it looked comical.”

Wander Around Looking For Water, Dehydrated Baby Elephant Get Help In Time

How The Dog Reacts In The Hot Tub Is Absolutely Priceless

20+ Photos Of Pets Who Can Get Cozy Anywhere

10+ Astonishing Animals Whose Size Is Out Of This World

Horse Plays Dying Drama Whenever He Gets Ridden