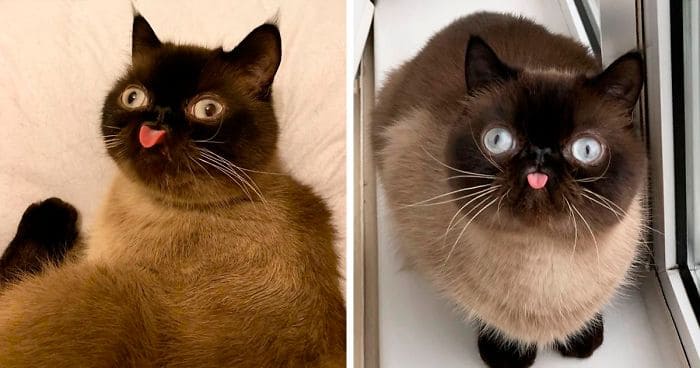 Meet Ikiru, the Exotic shorthair boy cat who lives with his parents, Rich and Emma in Yorkshire, England. He has become an Internet sensation after his parents shared his photos on social media. He is winning the Internet’s heart with his hanging tongue and his unique face. Some of the faces he makes are so weird that many people even think that there is something wrong with him.

“Ikiru is really healthy and our vet told us he has some of the best teeth she has ever seen,” Rich and Emma explained to Bored Panda. “Exotic shorthairs have a slightly pudgy face but he’s very energetic and in great shape. Believe it or not, he doesn’t always have his tongue hanging out, but it seems to be a quirk of his, leading to some amusing facial expressions.” According to Rich and Emma, they fell in love with Ikiru at the first sight they saw his cute photos a cat breeder’s website. At that moment, they decided to visit and take him home. After that, they created an Instagram account to document and share his daily life with the rest of the world. “He’s loving, affectionate, and grumpy in the best way. Ikiru is also playful and endlessly amusing. One particular quirk is he loves tunneling and hiding underneath things like blankets or sheets of paper, or staring at you upside down from the corner of a room.” He was named after a Kurosawa film, and ‘ikiru’ means ‘to live’ or ‘living’ in Japanese. He loves to lie upside down and create mischief. Rich and Emma never expected that their cat would become famous. “We get messages from all around the world saying his silly faces, cuteness, and personality brightens their day. He even inspires fan art, people have some fantastic illustrations which really capture his cheeky character.” Do you love Ikiru? Feel free to let us know youe thoughts in comments and don’t forget to share this post with your friends and family members!