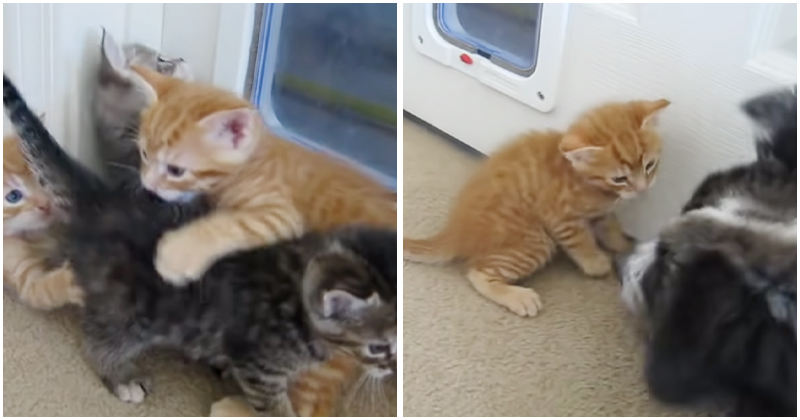 Cats, especially kittens, are playful and sometimes aggressive animals who might see their siblings or buddies as their greatest rivals. You can see little kittens fight each other all the time, but it’s not every day that you can spot a dog coming up to stop them. So, either you are a dog lover or a cat lover (or both), this hilarious scene can satisfy your heart for sure!

Meet Dan, a cute 10-month-old doggo who loved to take charge of the baby cats in the family. Even though Dan was a male, the Australian Shepherd – Newfoundland mix still knew exactly how to be a great mom. He even did the job better than the mama cat herself.

Dan’s daily job included keeping an eye on the kittens and never let them go too far – which happened kinda frequently. So, to make sure everything was under control, he often kept guard on the house and took care of the little beings under his roof. However, whenever Dan was not around, these felines could be really naughty and troublesome.

These tiny tabby cats were bold and daring. They could battle against each other viciously right before the very eyes of their owner (aka the cameraman).

Yep, these critters feared no one, except for Dan the adoptive mother. When he wanted to broke up their fight, all he needed to do was… showing up. Anyway, who says cats and dogs are mortal enemies?

Let’s take a peek at the hilarious moment when these little troublemakers were being caught in the act:

If you’re wondering why that ginger kitty was so calm and brave, actually the tiny boy and Dan were friends. They even took great pleasure in teasing and hanging out with one another.

Just take a look at their unique friendship:

Aren’t they lovely? Please share this amusing story with your friends and family!

Sick Kitten Abandoned At Trash Can Gets Second Chance At Life, Love, And Happiness