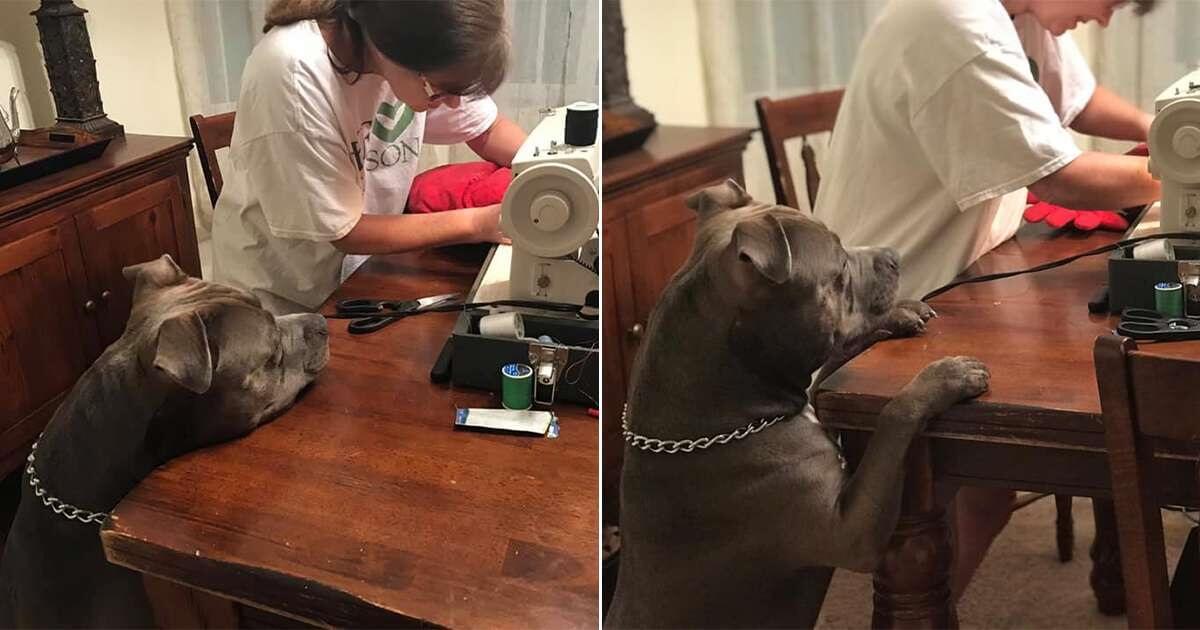 Meet Draco, an orphaned pit bull, who had a tough life in the past. He was rescued from a backyard breeder when he was just 2 weeks old. Thankfully, in his new home, he found one thing that can comfort him through good times and bad. That is a heart-shaped pillow with arms. Draco has treated his pillow carefully ever since he moved into the house. “If anyone else picks up his pillow he will dart over and grab it,” Allie O’Cain, Draco’s mom, told The Dodo. “He sucks it every single day to fall asleep.” “Draco is a crazy chewer and we have become a ‘rubber toy only’ house because anything with stuffing he will destroy in less than five minutes,” O’Cain said. “But he has been so gentle and loving with this pillow.” Recently, Draco’s friend, a black Lab named Willow, wanted to share the pillow, but Draco got a little too overprotective. When Willow caught the pillow, Draco rushed over to take back his prized possession and, in the process, the pillow ripped.

Fortunately, Draco’s grandmother saw what was happening and stepped into action. “We think [the pillow] was so worn out it just easily ripped,” O’Cain said. “My mom freaked out and grabbed it and yelled, ‘I’ll fix it, Draco!’ Draco’s grandmother saved the pillow with emergency surgery. She took it to her sewing machine and began repairing. Draco couldn’t just stand idly by while his beloved pillow was being operated on.

“The whole entire time Draco’s head and paws were peeked over,” O’Cain said. “He was whining and trying to reach it with his mouth.” “He acted as if his wife was in surgery,” O’Cain wrote on Facebook. As soon as the pillow was repaired, Draco rushed to cuddle it. He is happy as he can suck it every day to sleep again. If you love Draco and want to know more about him, you can follow him on Instagram.

Senior Homeless Dog Gets Rescued Just Before A Rainstorm