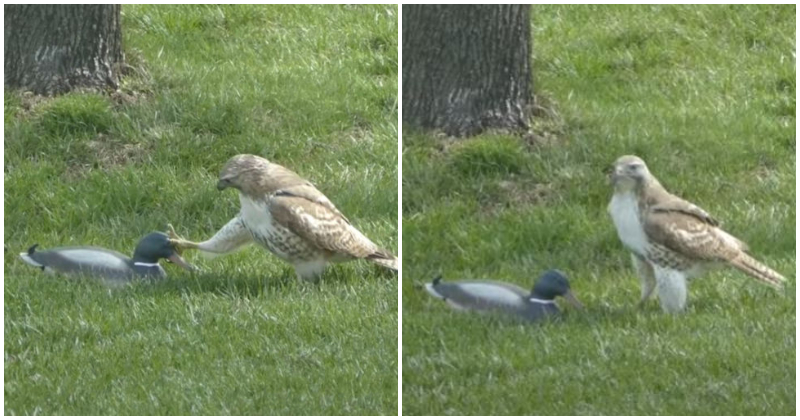 The relation between predators and their prey is sometimes hard to explain. Not all prey is afraid of its predators. It even makes friends with its predators, building a special bond with them. I’ve read a heart-warming story of a goat befriending a tiger when being given to it as live food. The two love spending time walking, playing, and sleeping together. This story is something hilarious that promises to bring you big laughs. A hungry hawk spotted its prey – a literally sitting duck that is resting in a patch of grass. The predator approached its prey, trying to scare and turn it into his good meal. However, he failed. The unflappable duck didn’t get bothered at all. And these funny moments were captured on camera by nearby visitors and shared on social media. It went viral in an instant as people can’t get enough of the two creatures. The hawk was doing everything to show off his “superiority” to the prey while it was sitting still. He couldn’t understand why that duck wasn’t afraid of him. Hilariously, it turns out that the sitting duck was actually just a decoy figurine. And of course, it wouldn’t be so easily intimidated. After a few minutes, the hawk started looking around. He needed to make sure that he wasn’t being punked. But he was. The hawk later seemed to figure out something “tricky” there, so he gave up on his prey. If you are looking for something funny to raise your mood on Friday, just give this video a look.

10 Pictures Showing That, No Matter What, Cats Will Always Be Cats

20 Cute Animals That Will Win Over Our Hearts In Seconds