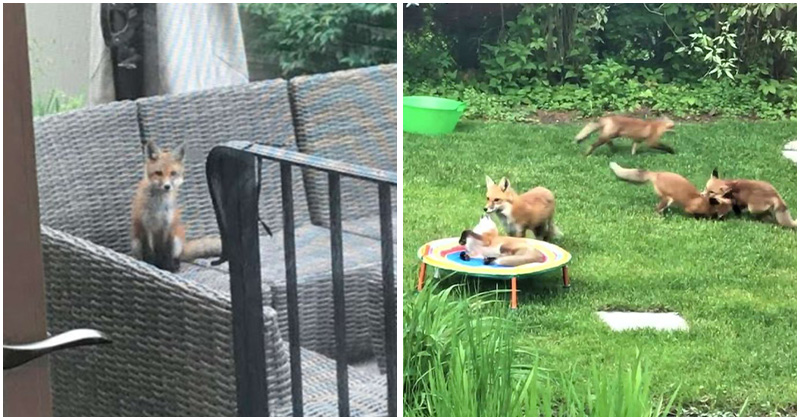 It’s hard to invite human friends to our house during this time of confinement due to the global pandemic, but how about some jolly furry friends? Of course they should be welcomed. It’s no secret that one or a few fun-loving visitors stopping by in this tough period will make our life way more interesting, no matter what species they are.

An Illinois resident named Shawn Davis had been hosting some really amusing guests in his backyard last summer. It all started on a nice day at the end of May as the man accidentally spotted two kit foxes in his patio, chilling and playing together.

Needless to say, Shawn was taken by surprise. The man and his family had been living in the middle of a residential neighborhood so their appearance was kind of confusing to him, not to mention he had never seen any foxes around either.

After that day, the young man began to see more and more foxes visiting his backyard every day, mostly an adult fox and five kits. Shawn assumed that it was the mother and her babies. He also saw the dad but not so regularly, maybe he was just too busy finding food for the whole family while his wife and his kids were having fun there together.

According to Shawn, his backyard was indeed a purfect place for these cheerful creatures to have a really great time.

“Even though our backyard is in the middle of a residential neighborhood, it is very private with a fence and a lot of trees and bushes,” he said. “I think they felt very safe, as they would often sleep under the trees in the daytime, and then play at dawn and dusk.”

Even though Shawn’s family had a little trouble cleaning the foxes’ mess each day, they were all happy to have them in their home. In fact, these wild critters were way more cheerful and adorable than they had expected.

“With the pandemic going on and us spending so much time at home, it was great entertainment for my wife, daughter, and I to be able to watch them grow up and play!” Shawn continued. “We didn’t realize they were so playful and that was fun to see.”

The kind man even put a trampoline out so the fox family could entertain themselves out there. He and his family never did anything to disrupt these foxes or try to chase them off, watching these carefree animals playing also make them feel much better somehow.

“Aside from sleeping in the daytime, they would chase each other and would all play fight and grab each other’s tails,” he said. “They also liked to gang up on the mom, who wasn’t afraid to dole out some moves of her own. We put a trampoline out at one point, and they liked to pounce on each other.”

However, the frequent visits didn’t last really long as the kits started to grow up and became more independent, but Shawn still hoped he could be able to see these funny guys again as soon as possible.

“We only see one or two every so often now as they have grown up, and I assume moved out of the den,” he said. “Our neighbors said they have seen foxes in other summers but never as many as this year. Hopefully, the kits will remember our yard as a fun and safe place, and will come back next year with their families!”

A Day In The Life Of Cinnamon, The Cute Hedgehog Is Living Her Best Life