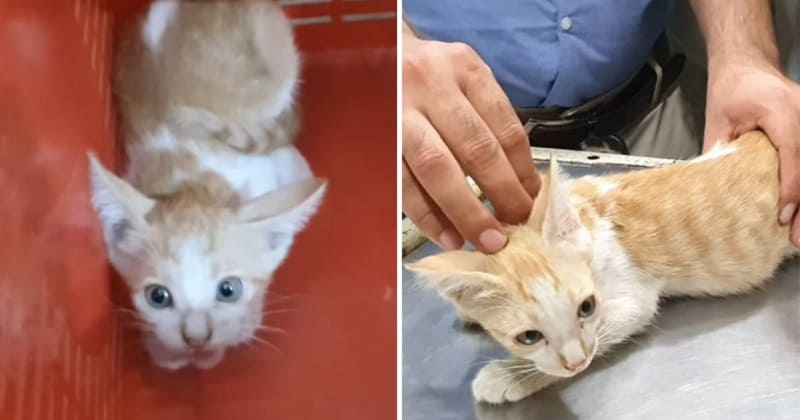 When Animal’s Cottage – Rescue Center knew about a poor kitten meowing in a garden for many days, they rushed to save the little baby. As it turned out, his mom had been left him alone, so he cried loudly to call her in every night. Sadly, the mother never came back to pick her little baby who was trying to fend for himself. The rescuers tried to catch him many times, but they failed. The poor creature was scared and ran away whenever people approached him. Because he needed a good home, the rescuers refused to give up. To save the kitten, they had to face many difficulties. Finally, they successfully caught him. That was their first rescue that they did in the night. The rescuers quickly took the kitten to their center to care for him. The little baby was terrified and still called his mom, so they tried to comfort and calm him down. They let him rest for a while and gave him food to fill his empty stomach. Because clinics were also closed at that time, they could do nothing but give him food and love. The next day, the kitten was still scared, so the rescuers just wanted to use their love to make him trust them more. Eventually, the kitten fell in love with the rescuers and his friends. Their love has made him accustomed to living with them. He even has a new name, Biscuit. What a cute name! This video really broke our hearts! Poor darling! You are now in good hands and will be taken care of! Glad the Animal’s Cottage took her in! It takes time to win a cat´s trust in you. Once you get it, the kitten will be your friend for life. Thank you for saving and helping her! God Bless you!