This is the hilarious moment a cranky cat turns off its owner’s phone alarm with his paw in the morning. For this reason, his owners often sleep through it and, as a result, turning up late for work. One of the cat’s owner said: “My companion and I were arriving late to work because the phone alarm wasn’t waking us up.

The owners were confused, so they decided to film to find the reason. When the phone starts ringing and vibrating, the cat jumps up to the bedside table, then paws at the phone’s screen until the alarm no longer makes a sound.

The owners can be heard laughing as their sneaky cat runs straight over to the mobile phone, bats the screen to turn off the alarm. The cat then begins clawing at one of the owner’s arms – making the pair giggle more.

The footage was recorded on 27 July in the Sao Carlos region of Sao Paulo, Brazil. “Recently, we have discovered that our kitty Joaquim was the one who was turning off the alarm.”

It seems that cats are waging war on mankind while we sleep. Take Lomphonten Lomphontan and his cat as another example.

Lomphonten recently struggled to breathe every night, so he decided to set up a camera to record what was happening as he slept. After he reviewed the footage, he found out that his cat Achi loved to curl up next to him all the time. After climbing on his chest and confirming with a paw that he’s indeed asleep, Achi has made himself comfortable on his master’s face, suffocating him with love. 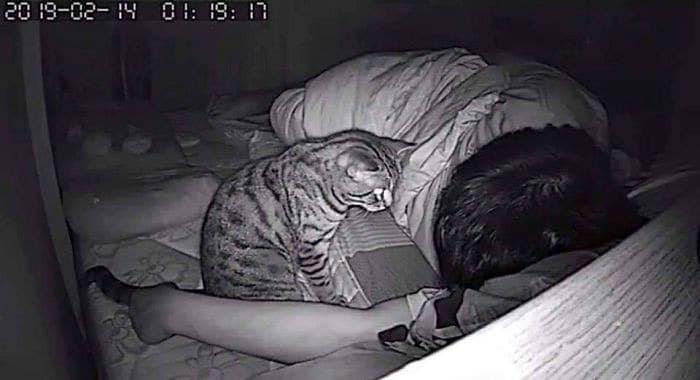 After discovering the oddest yet cutest reason for his breathing problems, Lomphonten doesn’t want to dissuade Achi from making himself as comfortable as he wishes at night. “I feel very much in love with him that he loves me like this. It’s a show of love,” Lomphonten said.

Visit To Aoshima Island – The Real Cat Heaven In Japan