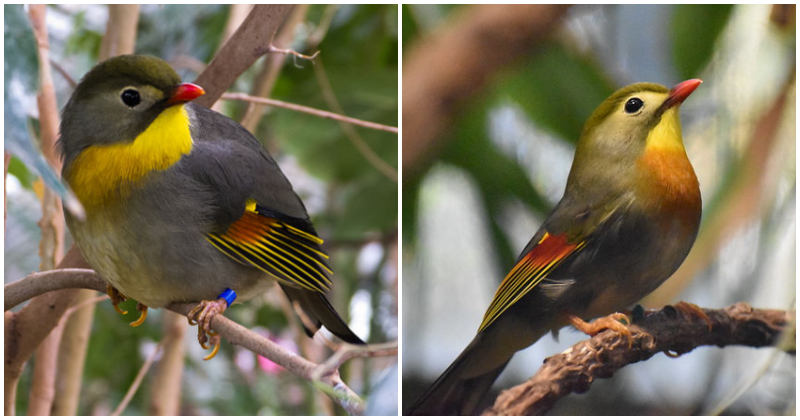 We can never get enough of the cuteness of tiny chubby birds. They look like flying fluffy balls painted with vivid colors. This coat can not be found in other species, making these birds conspicuous wherever they turn up. They are small but attractive enough to make humans keep their eyes on them. If you have an opportunity to see them in real life, make sure that you take it. The red-billed leiothrix is such a lovely bird! Most of its body is covered with olive green, creating a stunning contrast with its vivid yellow-orange throat. This bird also has a red bill, as its name suggests. This species also has eye-catching wings whose edges are brightly colored with yellow, orange, red, and black. Its tail is olive-brown with a black tip. Let’s see these stunning birds in the video below!

The female of this bird is duller than the male. She doesn’t have the red patch on the wings. Regarding young birds, they look similar to females, except for the black bill. The red-billed leiothrix is a plump member of the Leiothrichidae family. They distribute in India, Bhutan, Nepal, Burma, and some parts of Tibet. These birds prefer living in the hill forests, especially pine and bushes, at an altitude of 7,500 feet. Interestingly, they only fly when they are in the open. During the breeding season (from April to September), female red-billed leiothrix birds build their open nests in dense vegetation. This nest is made from leaves, moss, and lichen. The female then lays 2-4 eggs in the nest, incubates them, and feeds the chicks until fully fledged. Young birds are bright red with a rich orange gape when they hatch.