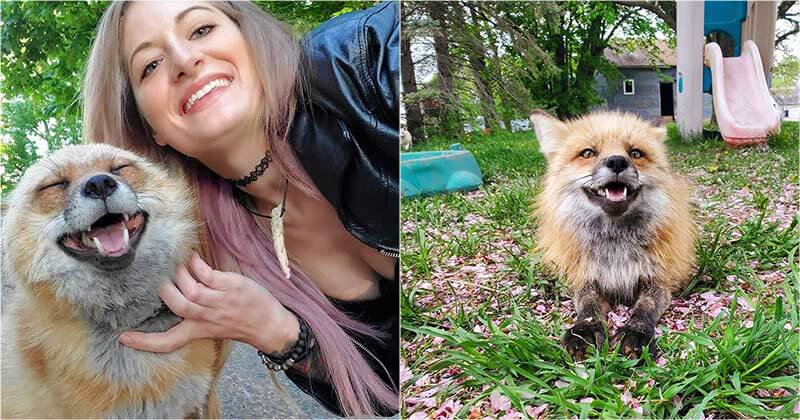 Have you ever been curious about what noises foxes make to communicate and express themselves? A rescue group called SaveAFox, which helps and gives home to abandoned pet foxes and those who were retrieved from fur farms can give you the answer. It’s not like what says in the song “what does the fox say?” released in 2013 but is exactly what you expect.

As foxes enjoy belly rubs, they make cute sound when receiving it. Let’s watch this video to see how it comes!

Just like many other animals out there, foxes produce their own distinct sounds to communicate and express themselves. Their vocalization comes in a variety, depending on the species. It ranges from noises similar to barking to a high-pitched howl, their screamy tone is hard to put into words. If you are looking for the answer, just listen for yourself. This video shows how these animals sound in a playful mood while getting their bellies scratched.

Aside from plenty of videos and photos of the foxes that the rescue organization have saved, they have recorded many other sounds these animals produce. Here’s is an example of how they sound when they’re calling for someone.

If you prefer understanding how the foxes communicate with, just look the video below. The shelter’s founder Mikayla shares how she talks to one of her foxes, and it’s happy and excited to hear her voice.

These videos come from the rescue organization SaveAFox, which helps injured foxes retrieved from fur farms and those who were abandoned after being kept as pets Let’s introduce a bit about SaveAFox, one of the biggest fox rescues in the USA. It is a non-profit rescue organization that saves the lives of injured foxes from fur farms and also those who have been adopted as pets and later abandoned. It was found after Mikayla had spent years volunteering at animal shelters. She absolutely loves foxes, so she decided to establish an organization that takes care of these animals. To raise fund for the organization that help to keep their shelter alive, SaveAFox shares many adorable videos and photos of their rescues. So please visit their social media.

If you want to help them out, you can find more info on how to donate here.

20+ Super-Chill Animals That Teach Us How To Best Relax

20 Photos That Show Life With Pets Is Full Of Love, Care, And Adorableness

60-Year-Old Elephant, Blind And Manipulated, Can Enjoy Relaxing Days Of Her Life After Rescued From Cruel Owners

20 Pets Who Are Very Clingy With Their Beloved Ones

10+ Animals Whose Emotions Are So Vivid, They Simply Can’t Hide Them