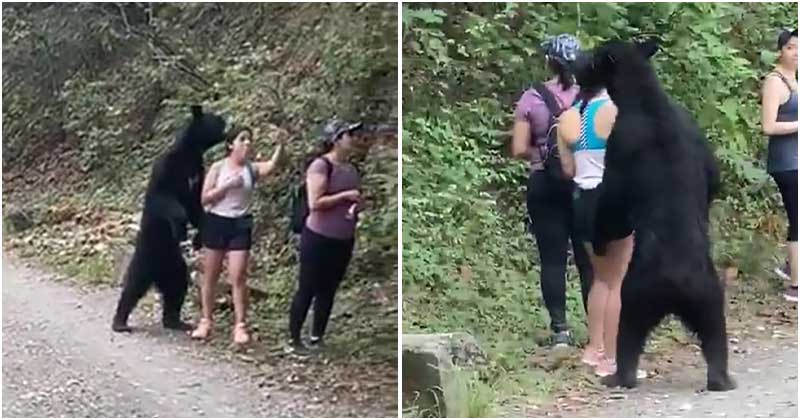 Perhaps, you’ve watched a lot of videos of bears playing around. Last month, I spotted a video of a group of 3 bears sneaking into a family’s backyard and having fun in the swimming pool. If you don’t encounter these animals, you may find their actions funny and adorable. But what will happen if you face to face them? Scare the living life out of you, for sure. This’s what 3 hikers in Mexico faced. A curious black bear approached these women, making them stand frozen in fear.

The video was shared on the Internet and went viral.

These women encountered the black bear when they were hiking at the Chipinque Ecological Park in San Pedro Garza García. The playful animal just wanted to sniff one woman’s hair and inspect her when the three were astounded at his presence. Luckily, no one got hurt.

One of three women grasped the chance to take a selfie with the wild bear. There are different views on her action. Some say that she was crazy while some give compliments on her braveness.

And you, how do you think of her action? The government of Nuevo Leon has issued advice on how to act in this situation. Try to stay calm and never do the following three things: feed the bears, stand between a baby and its mother, and photograph and take selfies with them.

20 Cute Animals Who Thought They Were Spies And Secret Agents

20 Animals Who Love Our Hugs And Cuddles More Than Anything

10+ Stories About Pets Full of Love and Drama

20+ Animals Who Are So Cute When They Get Angry