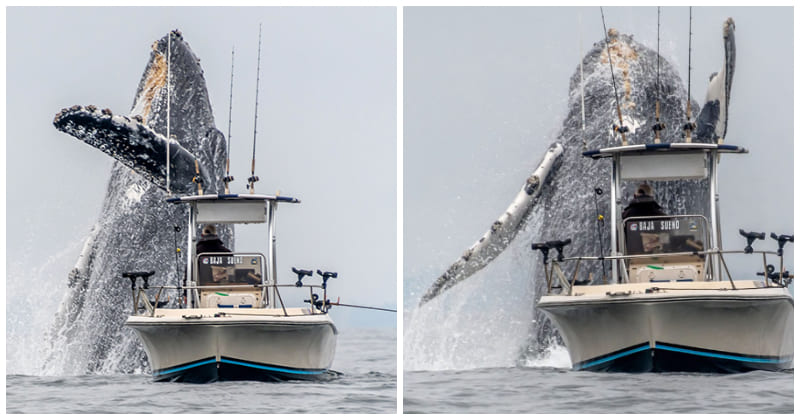 Nature never ceases to amaze us, humans. You may witness something that you have never imagined before. It will be a once-in-a-lifetime opportunity. For instance, you attend a sightseeing tour off the shore and see a massive humpback whale breaching the water right next to your boat. You must feel like you win a lottery ticket. Incredible! This does happen with photographer Douglas Craft. He captured the breathtaking moments when he was on a whale-watching boat in the Californian waters on Monterey Bay.

The enormous humpback whale was spotted leaping out of the water right next to a fishing boat. It stood right behind the fisherman! Douglas took incredible photos of the giant marine mammal from the porthole of his boat. The scene got him stunned for a few seconds but he immediately took out his camera and snapped it. Luckily, his shooting angle enabled him to get a bigger and clearer view of the whale. Noticeably, the creature made the fishing boat look incredibly tiny in comparison.

“I went below deck to shoot from a porthole close to the waterline. That’s what gives this amazing perspective of looking up at the whale,” he told a news agency. When the photographers share photos of the breaching massive humpback whale on his accounts, they went viral in an instant. People can’t stop “wowing” at what Douglas captured on his camera. It’s probably a miracle!

Douglas also had help from Kate Cummings, a whale watcher who managed to capture a video of the whale exploding out of the waters. “It was fun capturing this video. The whale had already breached multiple times much further away from the fisherman. But sometimes when whales breach multiple times, they’re also heading a specific direction when they’re underwater building momentum for the next breach,” Kate revealed to the media. For those who may not know, adult humpback whales weigh around 25–30 metric tons (28–33 short tons), and at 12–16 m (39–52 ft) in lengths. These giant marine mammals are very popular among whale watchers for their breaching and other distinctive behaviors.

Adorable, Playful Baby Seal Waves At The Camera And Melts The Heart Of Millions On The Internet

Come To A Village Looking Food, Malnourished Brown Bear Cub Get Rescued and Adopted by A Farm Owner