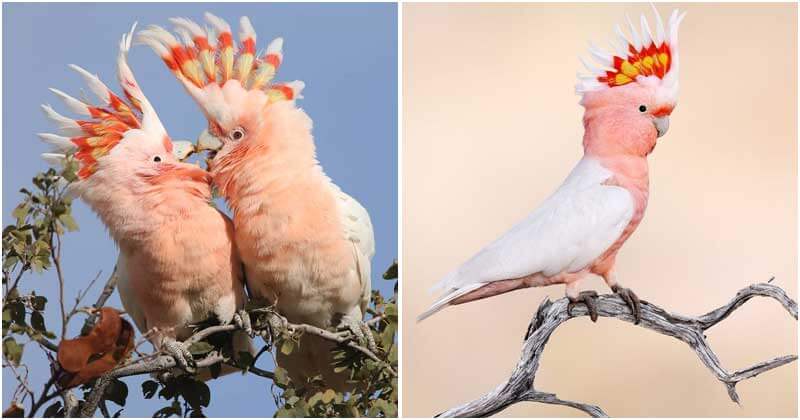 The Major Mitchell’s Cockatoo is a gorgeous bird. The vivid crest, the most prominent feature of this medium-sized cockatoo makes it stand out in its community. This crest looks like candy corn, right? This beautiful cockatoo is named for Major Sir Thomas Mitchell, an explorer and surveyor of Southeast Australia in the 1800s. Pink cockatoo is another name of this cockatoo. You can definitely get the reason. It has soft white and salmon-pink feathers. Its large, bright yellow and red crest makes it the most beautiful amongst the cockatoos. There is a small difference between the male and female. Males have dark brown eyes while females pink or red eyes. Major Mitchell’s cockatoos are native to Australia. They commonly live in scrublands, savannas, and wooded grasslands where there are water sources nearby. These striking birds are weak fliers, only flying at a low altitude. They often fly for a short distance and rest before continuing their flight. The main source of food of these cockatoos are seeds of native and exotic melons, and seeds from several pine species. They also eat waste cereal grain, the seeds of several weed species, and insect larvae from branches. Pink cockatoo’s mating season is between August and October. The males have their “dance” to attract female birds. They strut along branches while bobbing their heads up and down with raised crests. After finding mates, mating pairs will build their own nest that is one kilometer or more from other pairs. The females lay two to five eggs at the rate of one egg every 2 to 3 days. They incubate their eggs for 23 to 30 days. Then the males feed the chicks for 8 weeks until they are ready to fledge. Marwell Zoo Is So Excited About Its Newest Addition: A Newborn Przewalski’s Horse Foal

10+ Funny Pet Photos That Give Your Daily Dose Of Laughter

10+ Precious Newborn Animals That Will Warm Your Heart

20 Animals Who Have Definitely Found Their Human Soulmates In Life