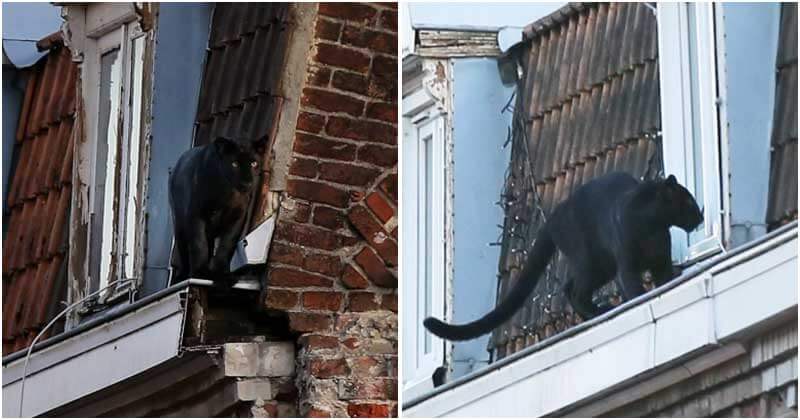 Spotting a black wild panther prowling the rooftops? Most of us agree that that scene only appears in Hollywood movies. But it actually happens in real life. A majestic wild cat was caught roaming on the rooftops of a residential building near the French city of Lille. The black panther is believed to be 6 months old and weighs about 45lb. French media reported that it had been kept as a pet and escaped from its owner’s home. Luckily, the majestic cat was captured by local authorities after 2 hours. A local vet used a gun to fire hypodermic tranquilizer at the animal as it tried to climb into a window. The black leopard was then taken to a zoo in the town of Maubeuge. It would stay there for one or two days before being moved on to an animal sanctuary. Victor Lefranc, a witness of the incidence tweeted: “Imagine relaxing at home in Armentieres and a black panther passes in front of the window.” “The Panther was calm and clearly well domesticated, but still considered a danger,” said a security source involved in the recapture operation. Regarding the panther’s owner, he had gone on the run and was hunted by cops. 20 Animals That Are The Proof Of Nature’s Wisdom, Number 1 In Creativity.

Meet Three-Wattled Bellbird, A Unique Bird With Mustache And Covered In Reddish Brown, Except For White Head And Neck

A ‘Fire-Headed’ Feathered Ember, Flitting About In A Desert Landscape!

There Is No Rule In Nature, Proving In 30 Animal Photos

Parrot Screams “Let Me Out” And Brings Cops To The Home

Covered In Striking Shades, The Multicolored Tanager Is A Star Of The Forest