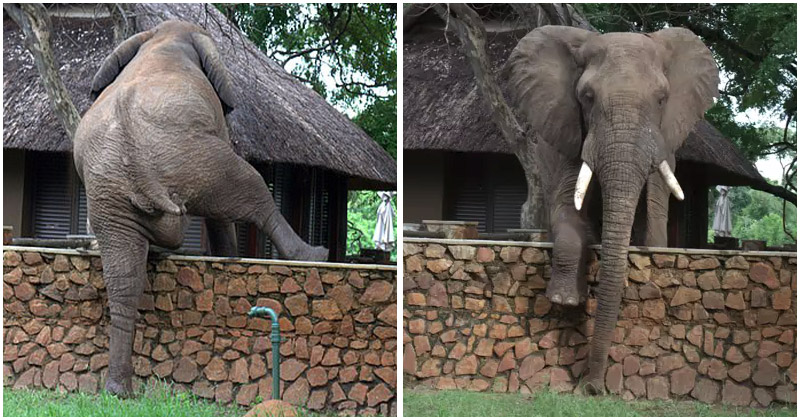 It’s no secret that elephants often snack on a variety of fruits including apples, bananas, melons and pineapples…, but did you know that these sweet giants love mangoes too? In fact, they do have a soft spot for these tasty tropical fruits and they don’t mind crossing some boundaries to get what they long for at all.

A high-spirited elephant at the Mfuwe Lodge in South Luangwa National Park, Zambia has gone viral lately after being caught climbing over a 5-foot wall just to steal some mangoes. Even though elephants in general are often said to be quite slow and laid-back, this funny tusker is proof that once they set their mind on getting something, they could be impressively agile despite being the biggest animal on land.

Of course, the endearing elephant’s hilarious show captures the attention of everybody around since he decides to take action in broad daylight. His whole unlawful act has been caught on camera and shared with the whole world.

Actually all the elephants at the Mfuwe Lodge drop by the safari lodge in search of mangoes quite frequently, but this funny boy is still unique since he is the very first one climbing the wall instead of choosing the main path. Not to mention the poor critter is a bit late since the mango season in that area is between October and December.

“He just chose the most direct route and made himself right at home,” says Mfuwe Lodge’s general manager Ian Salisbury. “The guests were very amused at the idea of a climbing elephant. They were in amazement that it would bother to climb over such a high wall. He was a stranger to us. He wanted to investigate. He wanted to get into the central area where this big mango tree grows.”

We are not sure about whether the playful boy could achieve what he wants, but one thing we do know is he has won the hearts of both tourists and countless fans on social media.

“He came and stretched over, had a look around, ate a bit of grass, then strangely turned round and came back the same way, which was quite amusing,” Salisbury continues. “His easiest way of getting there was to climb over this high wall. It’s really unusual behavior for an elephant to climb so high.”

Let’s take a peek at the humorous scene:

Covered In Striking Golden-Yellow Plumage, The Golden Tanager Is A Flying Apricot Of South America

20+ Animals That Know How to Survive Hot Summer Days