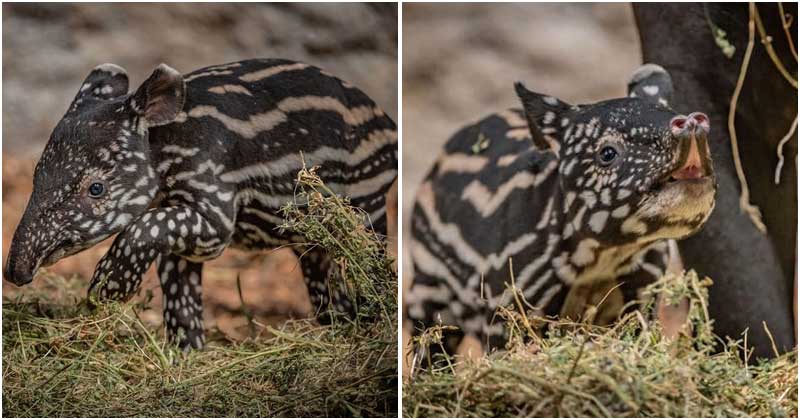 Do you know that the Malayan tapir is an endangered species? There are estimated to be less than 2,500 individuals left in the wild. They distribute in Malaysia, Thailand, Sumatra, and Myanmar. Over the past decades, their population has decreased by half due to habitat loss and hunting. This species was added to the Red List by the International Union for the Conservation of Nature’s.

That’s why the birth of any Malayan tapir is worth celebrating. And recently, the Chester Zoo has got that luck. An incredibly rare and extremely adorable Malayan tapir was born here. The newborn animal was named Rony and weighed around 11,2 pounds. He was born after 391 days of pregnancy to his mother Margery. His father is Betong.

Watch the video of the loving animal below.

Rony is super cute with his black and white color. You can never keep your eyes off this little four-legged creature. “It’s wonderful to hear the pitter-patter of tiny, spotty Malayan tapir feet again for only the second time ever in the zoo’s long history. Mum Margery is ever so good with the baby. She’s very attentive but also gives him chance to explore and find his feet,” Sarah Roffe, the zoo’s team manager told in a statement. If you love the super adorable Malayan tapir, just share this post with your family and friends.

Happy Seal Waves To The Camera While Sunbathing On British Beach

30 Animals That Forgot The Word “Boredom” In Their Life