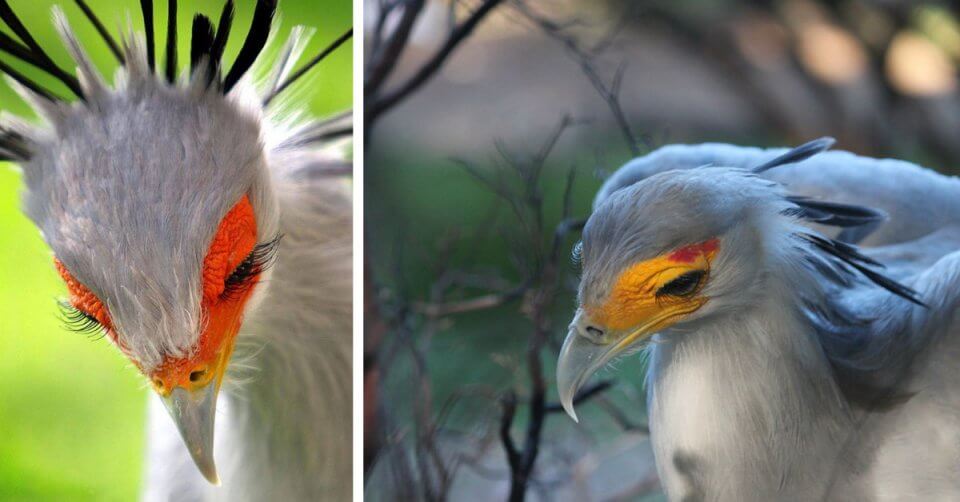 A LONG-LEGGED BIRD WITH A SERIOUS KICK AND EYE LASHES LUXURIOUS ENOUGH TO MAKE MANY WOMAN GREEN WITH ENVY! 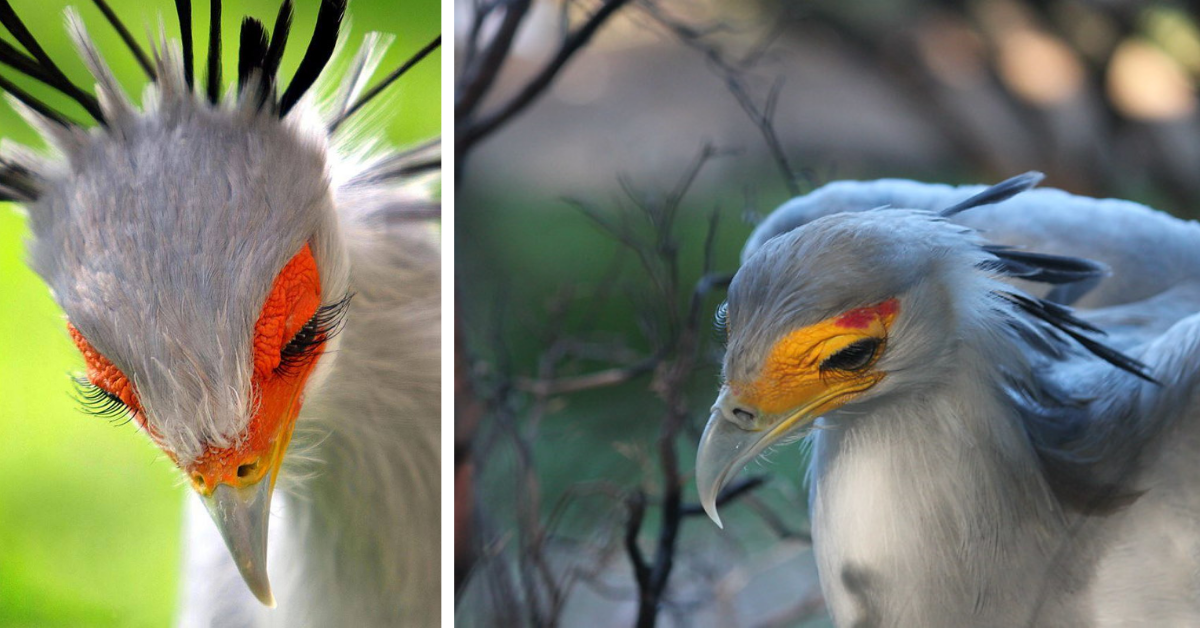 SOME BIRDS HAVE PRETTY INTERESTING NAMES.

The White-browed tit-warbler is one that springs to mind right off the bat. Though it wasn’t actually named after a part of the human anatomy, the name sounds less than inappropriate to modern ears. So when I say there is a long-legged bird that sounds like it is named after office workers, with eyelashes that would make many models envious, what springs to mind? 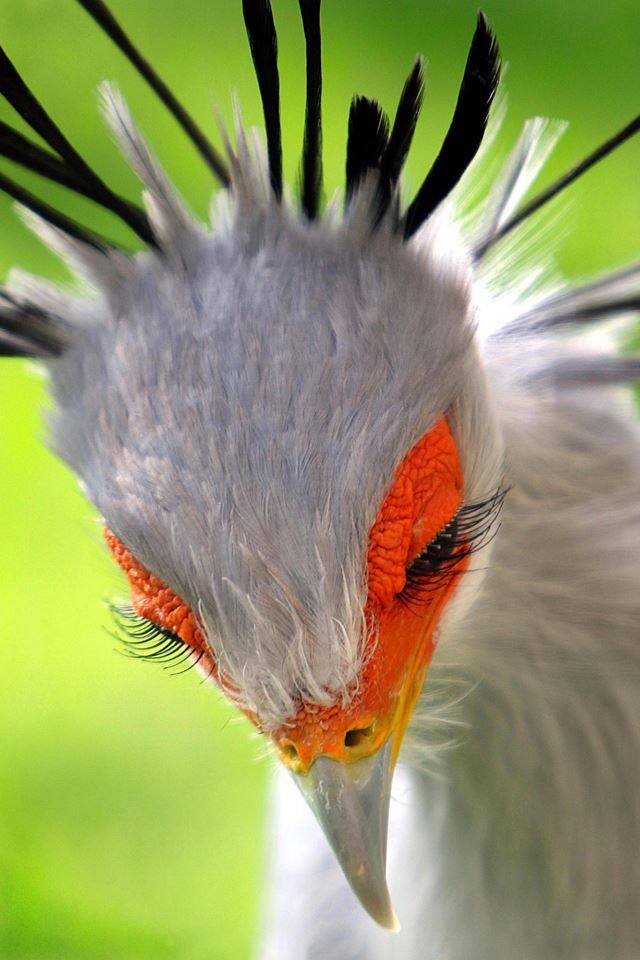 The Secretary bird is a distinctive bird, to say the least, combining a tall, elegant, long-legs with an eagle-like body. On its head are quill-like plumes, that look like an Indian headdress, red facial skin, and plumage on the upperparts, and lesser median wing coverts which is blue-gray. The underwing coverts are a lighter gray to gray-white. 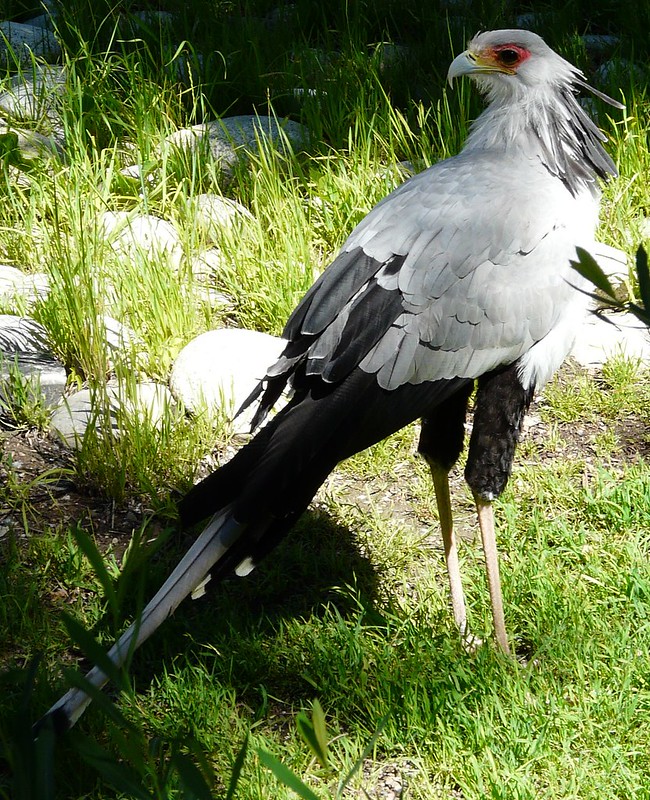 Standing at up to 4 ft 3 in both males and females look very similar. Though males tend to have longer tail feathers, a shorter head, and more head plumes. 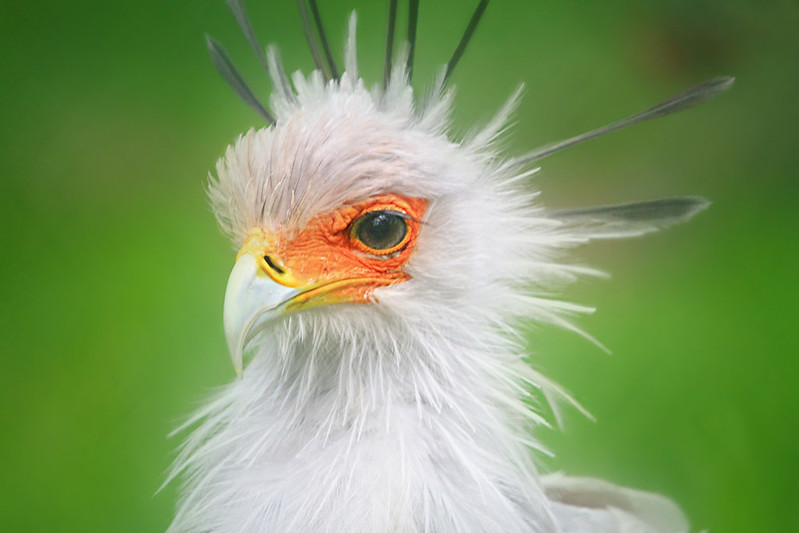 The plumage of the crown, upperparts, and lesser and median wing-coverts is blue-grey, and the underparts and underwing coverts are lighter greys to grey-white. 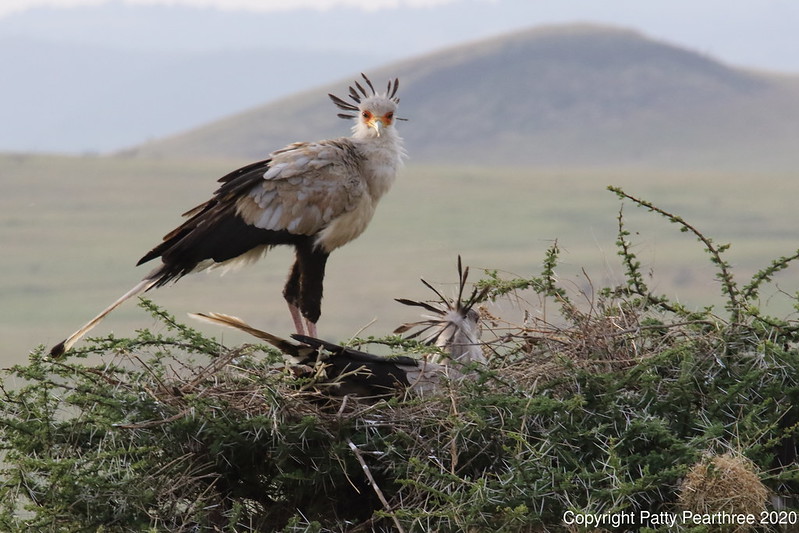 Native to sub-Saharan Africa, from Senegal to Somalia and south to South Africa, the Secretary bird is non-migratory, though it may follow rainfall to keep up with the abundance of prey.

Preferring open rangeland and Savana, where it strides around on its long legs looking for reptiles, mammals, and insects which it bludgeons to death with its legs. 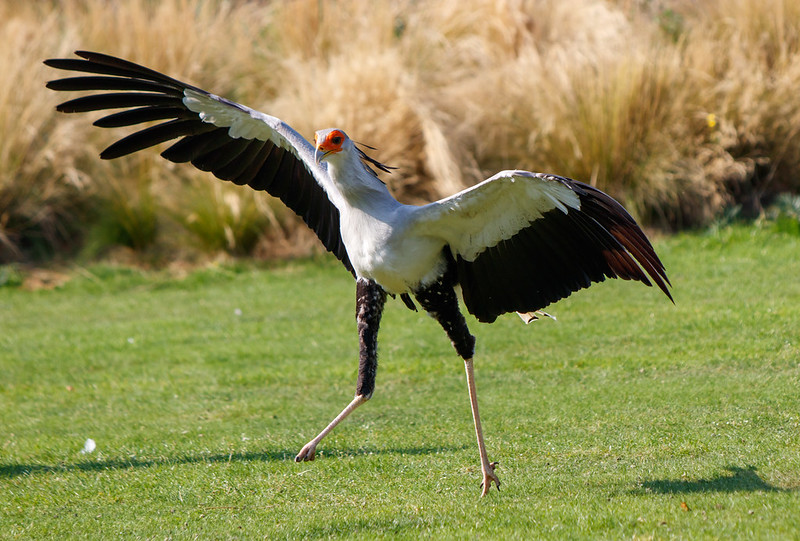 Apparently, the bird’s name came about when Dutch settlers in Africa called the bird “Sagittarius,” but the local farmers called them “Secretarius.” The latter stuck and eventually the name morphed to the name secretary. 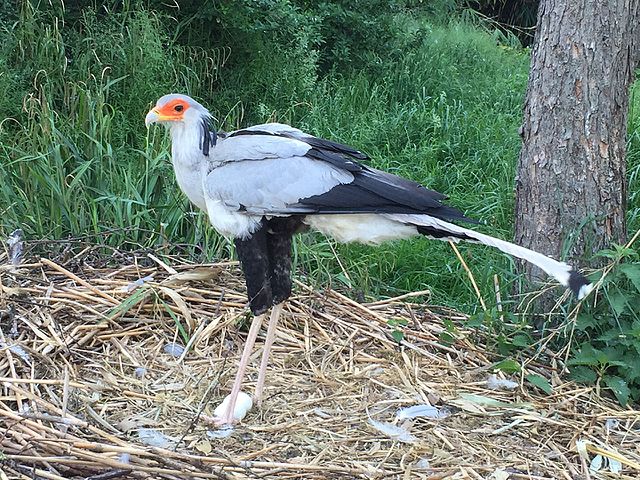 Secretary birds form monogamous pairs defending a large territory of up to 19 sq mi. Breeding can occur at any time of the year, however, it is more frequent at the end of a late dry season. A nest is built, usually at the top of a tree by both male and female, and 1 – 3 eggs are laid at different times. After the eggs hatch the chicks are fed by both adults, which take turns feeding their young. Young usually leave the nest after around 75 – 80 days. 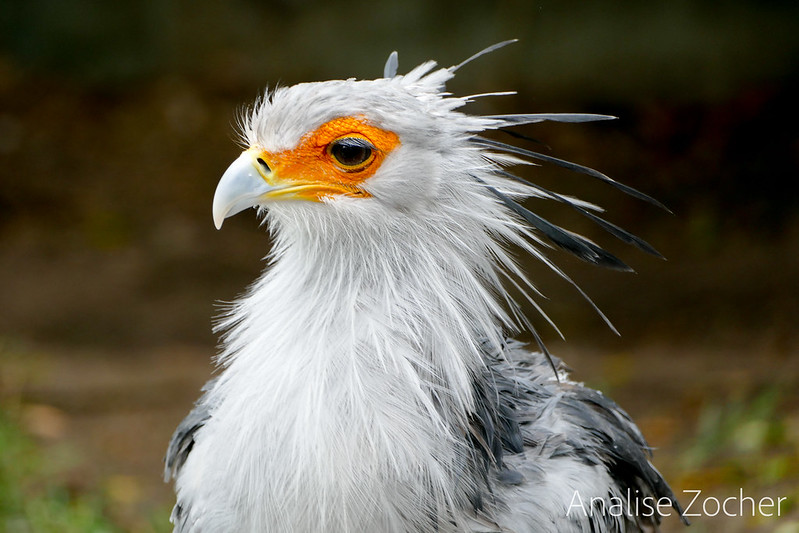 Though a bird of prey, Secretary birds are largely terrestrial hunters, hunting down their prey on foot. They do this hunting in pairs or in familial flocks, stalking through their habitat in long strides. Their diet consists mainly of insects such as locusts, beetles, and small mammals like mice, hare, and mongoose. They also eat, crabs, lizards, snakes, tortoises, small birds, along with their eggs. 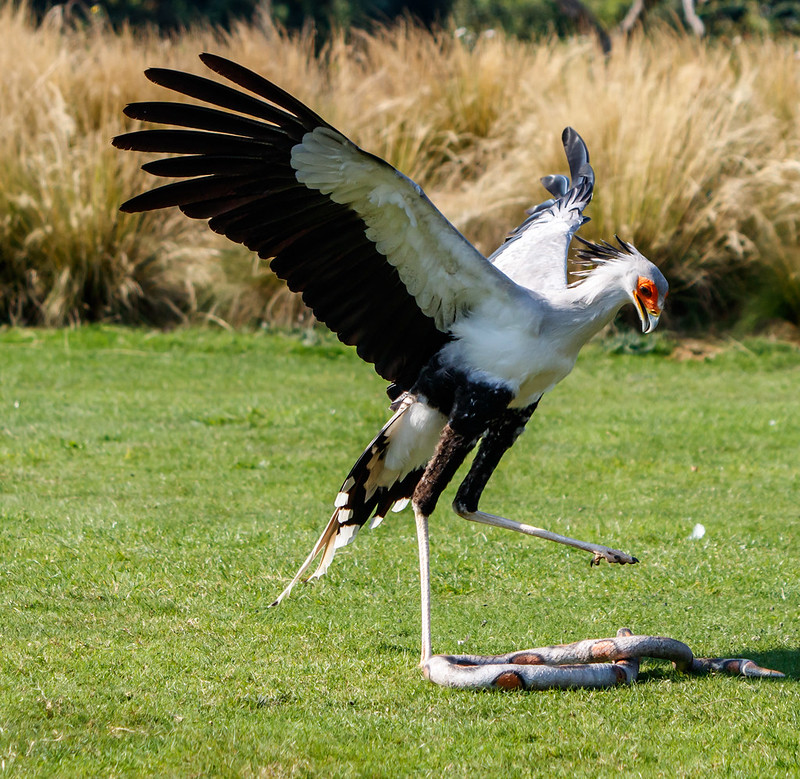 In 1968 the species became protected under the African Convention on the Conservation of Nature and Natural Resources. They are currently threatened by habitat loss, but conservation efforts are proceeding to slow and hopefully stop the decline in population. 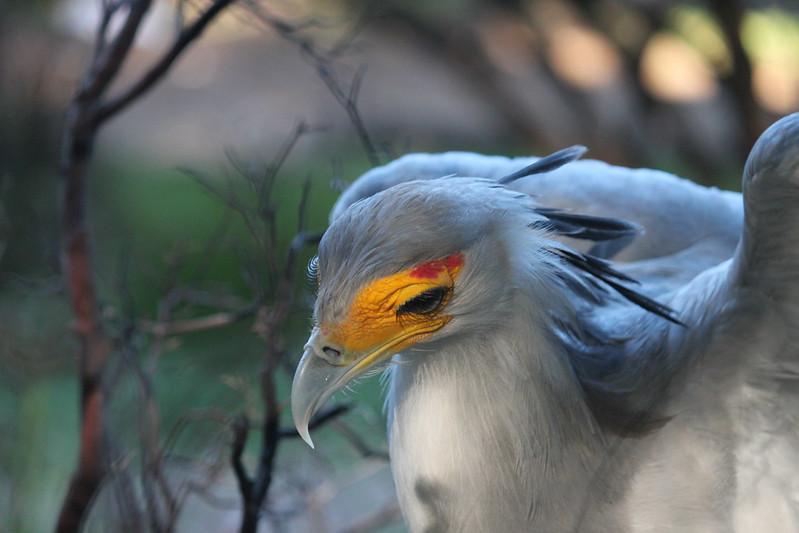 WATCH A VIDEO ON THE SECRETARY BIRD BELOW:

Lion Family Of 3 Lionesses And 8 Cubs Captured On Camera In the Serengeti Loliondo Conservation, Tanzania