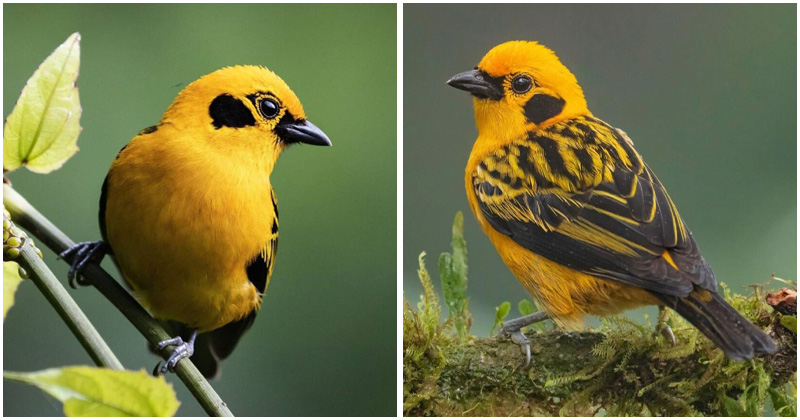 Dubbed as the “Bird Continent”, South America is home to 3439 bird species yet all of them are unique in their own way. The golden tanager is one of those stunning critters. Covered in striking golden-yellow plumage, this lovely birdy looks like a flying apricot that shines brightly wherever it appears.

The golden tanager (Tangara arthus) is a proud member of the family Thraupidae – the second-largest family of birds which represents about 4% of all avian species. As its name suggests, this little birdie has an enchanting yellow coat with chic black bill, back, wings, tail and two ear-coverts on both sides of its head.

Unlike many other birds, the female golden tanager looks quite similar to the male. They share the same colors, size and weight. Their juveniles also resemble their parents, although their plumages are a little bit duller.

Each adult golden tanager measures about five inches (13 cm) in length with an average weight of 0.78 ounces (22 gr).

Let’s take a look at this charming cutie:

This prominent bird is mostly found in north-western South America, typically in highland forests of the Andes, from Bolivia and northwards to the Venezuelan Coastal Range. It doesn’t like to live alone and often joins other birds to form small mixed-species flocks to travel together.

As an omnivore, the golden tanager dines on both fruits and insects. This small-sized bird could eat a variety of tropical fruits, including bananas, papayas and mangoes.

The female golden tanager is the one to be in charge of building their nest from plant materials like twigs and leaves. After a cup-shaped nest is finished, it often lays one or two white or grayish-white eggs within and incubates them for the next 15 days until they finally hatch.

The interesting thing is their chicks are fed not only by the parents but also other supporters, possibly young birds from the first clutch or other members of the family. They often become fledglings after 14 – 16 days.

Because of its wide-spread range, the golden tanager is among the least concerned species by the IUCN.

20 People Who Are Enchanted By Their Beloved Pets

15+ Pets Who Attempt To Be The Best Parents

Wearing Black Bib, Crimson Dress And Blue Eyeshadow, The Malabar Trogon Is The Fashionista Of The Natural World