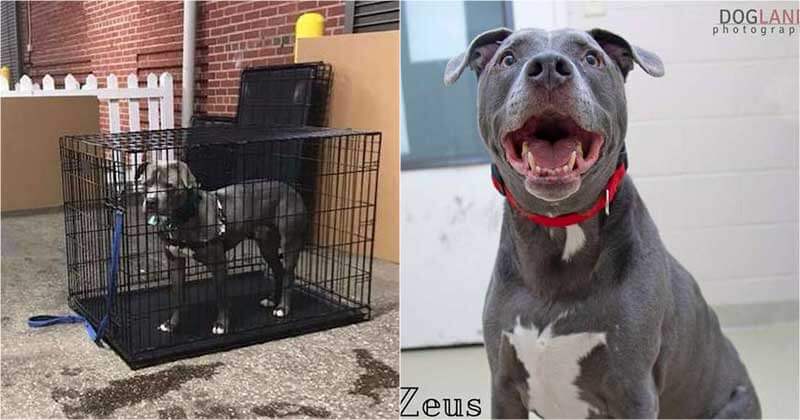 Every dog is a good dog. They deserve to have a forever home. But not all of them have that luck. They have been waiting so long for adoption. Some even can’t wait for kind-hearted people to come to help them. No one wants this to happen. King Zeus the senior pit bull in this story finally finds his angel. The homeless dog must have endured a lot on the streets. He had scars all over his face.

The 9-year-old Weimaraner/Pit bull mix was brought to the Humane Society for Hamilton County in Indiana (HSHC) in April. He looks rough and rugged but turns out a sweet and gentle giant. “His soulful eyes and love for pets and cuddles made him a staff favorite. Zeus loves humans of all ages – kiddos included!” the HSHC wrote.

Due to his appearance, King Zeus was left behind after 299 other dogs at the Adoption Event. Noone stopped to look at the poor dog. The dog’s reaction also tightened the heart of people. He just laid down quietly in his crate, watched people pass by him. “He never barks to get attention. It’s as if he has given up hope of finding a forever home.” HSHC wrote.

You can watch the video of the senior pitbull here.

Noticing this, his rescuers were confused and saddened. The good dog should have got adopted quickly. He deserved this.

“Living with other dogs is just too difficult for King Zeus,” HSHC explained on his adoption page. “However, we know that he did well with the children he lived with and that he loves humans more than anything.” However, King Zeus could smile for the very first time after finding a forever home. Austin Smith spotted the special dog after the adoption event and brought him home.

“Today, after months of waiting, King Zeus found his forever home! Thank you to everyone for sharing this post and sending him your thoughts and wishes,” HSHC happily wrote on Facebook. Injured Puppy Gets Rescued And Given Second Chance At Happy Life