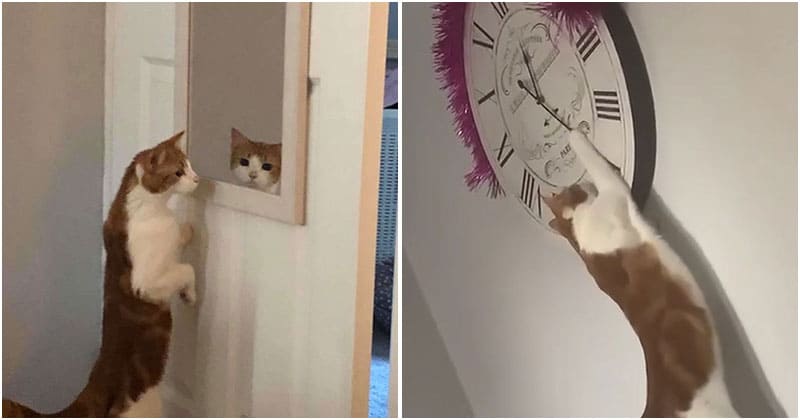 Meet Willow, a white and orange cat who is always curious about every single thing around her. She loves to explore everything in her house. Even if there’s something her family thinks she can’t do, she always finds a way to get it. “She jumps in an open cupboard or drawer and hides in shopping bags or any bag really,” Michelle O’Connor, Willow’s mom, told The Dodo. “If you remove her she meows in a temper tantrum. She’s always doing things she shouldn’t be like chasing the dog so she’s affectionately known as twat cat.”

A few months ago, O’Connor noticed that a clock hanging on the wall was wrong. She fixed it, but it always ended up wrong again. She didn’t know clearly what happened to it. She just thought that it was probably broken. However, O’Connor discovered that the clock was not broken. The culprit was Willow. She changed the hands on the clock, causing it was always wrong. And of course, she was not at all happy when she was finally caught.

“My daughter caught her red-handed and sent me the film,” O’Connor said. “No guilt from her whatsoever. She just meowed in temper when she was stopped.”

Willow loves to change the clock, so she definitely is not happy about being stopped. Now, if she wants to do it again, she will need to be very sneaky about it, because her family is watching for it. “So far I haven’t seen her do it again,” O’Connor said.

How To Trap A Cat In 3 Easy Steps

10+ Photos That Show Cats Are The Best Subjects To Photograph

This Cat Bows Like a Gentleman Every time Someone Greets Him