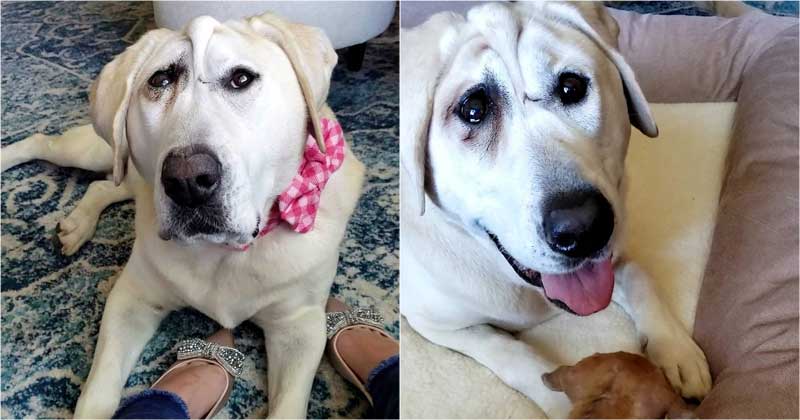 Not all animals were born with perfection. They have some born features that make them different from their siblings or others of their breed. The dog in today’s story had a tough life as a puppy. He was born with a facial deformity that got him abandoned twice. Luckily, the poor doggie now finds his forever family and enjoys living here. Keep scrolling! Beaux is the name of the dog. He is an adorable Labrador with a sunken cranium or a “squished face.” His facial deformity caused him an unhappy childhood until his human mom found him and offered him a family. His happy life has just begun. Even though Beaux’s imperfection doesn’t affect his abilities, no one was willing to buy him from the breeders. The poor pup was finally given away for free. But that’s not all. The “for-free” poor pup didn’t have a better life. He was abandoned twice. Beaux was neglected and forced to stay alone in the backyard, tied up by the couple who adopted him. They didn’t care much for the poor dog as he had fleas. Ultimately, when they decided to move, they sent him out for another adoption. It is when Jamie spotted the imperfect dog. She said that she was “horrified” at the situation Beaux. He got malnutrition, weighing only 42 pounds (19 kgs) and had worms. The woman didn’t hesitate to bring him into her home and showed him love for the first time in his life. Jamie took him to the vets for checkups and necessary treatments. Although the journey was slow, Beaux went through and is happier than ever. Beaux is finally getting the love he deserves. Beaux and Jamie are now inseparable. The dog also has a 15-year-old brother, Riley, and they get along perfectly. They love spending time together, from sleeping to playing, to walking. Do you love this story? Is it heart-warming? Let us know your thinking on the comments below!

Senior Homeless Dog Gets Rescued Just Before A Rainstorm