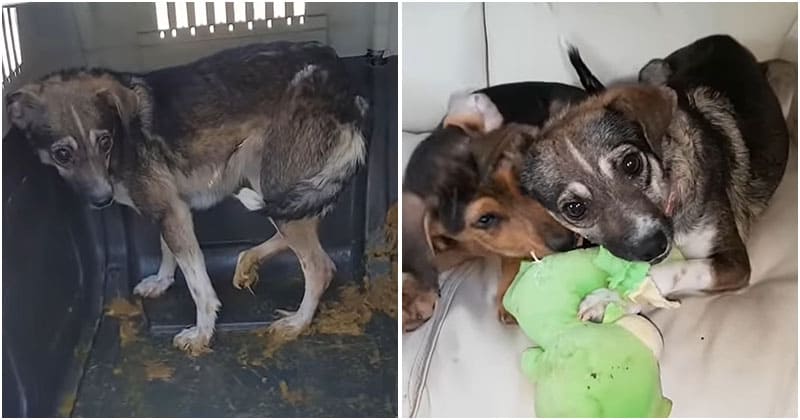 Greece is one of the countries that has a high percentage of animal lovers. Stray dogs and cats here are taken care of not only by the locals but by the government as well. The law in Greece states that if an animal is injured then the municipality is responsible to treat the animal and neuter it. After some time, if no one wants to adopt it, the animal must be released where it was found.

Sunny is a poor dog who was a victim of a car accident. Thankfully, the municipality treated her and took care of her until she was healthy enough to be adopted or released. She spent one year in a cage waiting for a loving home and a great owner. But sadly nobody wanted to give this poor girl a new life.

When she was about to be released, Takis, the founder of Takis Shelter, stepped into adopt her. He did that because Sunny was extremely afraid of humans. Being in a car accident is a scary, stressful experience, so releasing her in the area that she was found would be not good for her.

When she arrived in the shelter for the first time, she was terrified and stress. It was very difficult for Takis to get close to her, but he refused to give up. With a lot of patience and love, he gained her trust and made her more friendly. After a few months, Sunny came out of her shell and became an adorable healthy dog.

Not only does he have great people who love and care for him, he also has a best buddy named Ozzy. They love each other and can spend most of their time playing together. The playful dog Sunny also loves to play with other pups and dogs in the shelter. From an injured and terrified dog who was scared of people, she now transforms into a happy and naughty dog.

We are glad to know that Sunny was adopted by a lovely couple in Finland. After everything happened to her in the past, she is now enjoying her best life that she deserves. She gets lots of love from her new owners and her new friends. We hope that her life will be full of joy and love forever.

Watch the full rescue and amazing transformation in the video here:

If you would like to support Takis and his shelter, you can donate here. Every small donation is greatly appreciated and it is directly used for the rescues and the welfare of the animals at the shelter. To find out more about Takis Shelter, and to follow more amazing rescues, please visit Takis Shelter on Facebook.

Boxer Dog Was Abandoned And Tied To A Lamppost, Kept Waiting With Sad Eyes