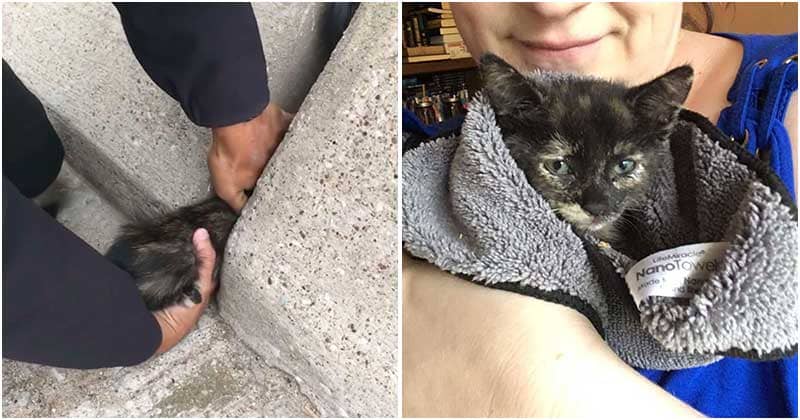 Saving animals in need can be one of the most rewarding experiences in the world that money can’t buy. For anyone who has ever given an animal a second chance at life, they know clearly how wonderful it is.

Meet Kristyn Gamblain, the kind-hearted woman from Fort Worth, Texas, recently rescued a kitten stuck in a highway barrier. Gamblain was on her way to work on September 11 when she saw a tiny ball of fur on the side of the highway. She continued on her way, but she couldn’t stop thinking of it. She thought that the fuzzy black ball could be a living creature in trouble.

Even though she had no real evidence, she quickly turned around to find out what was going on. She knew clearly that she couldn’t ignore anyone who needed her help. She couldn’t remember exactly where she saw the kitten, so she went all the way back to the beginning of her journey to look for the little creature. Finally, she found it and carefully pulled over on the side of the highway.

It was clear that Gamblain’s suspicions were absolutely correct. The fuzzy black ball was indeed a kitten, and the poor little thing was trapped headfirst in a cracked barrier. “[I was in] utter disbelief followed closely by amazement that she was actually alive,” Gamblain told The Dodo.

As Gamblain tried to safely free the kitten, a highway patrol named Officer Bennet arrived to help her. A few minutes later, a few cops came to divert traffic so that the tiny kitten could be rescued safely. After a lot of maneuvering, they were able to free the little one completely. Everyone cheered and celebrated when the kitten was freed. “Oh happy day!” Gamblain wrote. “We did it!”

“She gave a little meow after being freed and then she buried herself in my arms when I scooped her up — she honestly seemed a little shell-shocked but relieved to be rescued,” Gamblain said. One of the officers asked Gamblain if she could keep the kitten, she immediately said yes. “A smiling Officer Galbraith turns to me and asks if I am going to keep it, and even though I had just rescued Ginni a week before, I said of course!” Kristyn explained on Facebook. “How could I not when I just spent 45 mins rescuing her!”

Watch the rescue in the video below:

The kitten was named Jersey and is now settling into her new home. She couldn’t be happier that she found a forever home and a beloved mom. Her happy life is just beginning!

Do you love this rescue? Tell us your thoughts in the comments below! Please share it with your friends and family members!

30 Viral Cat Photos That Make You Laugh Out Loud

This Cats Owner Comes Home After a Long Separation… You Won’t Believe How the Cat Reacts!

Poor Kitten Recovering After Being Found With Mouth Glued Shut