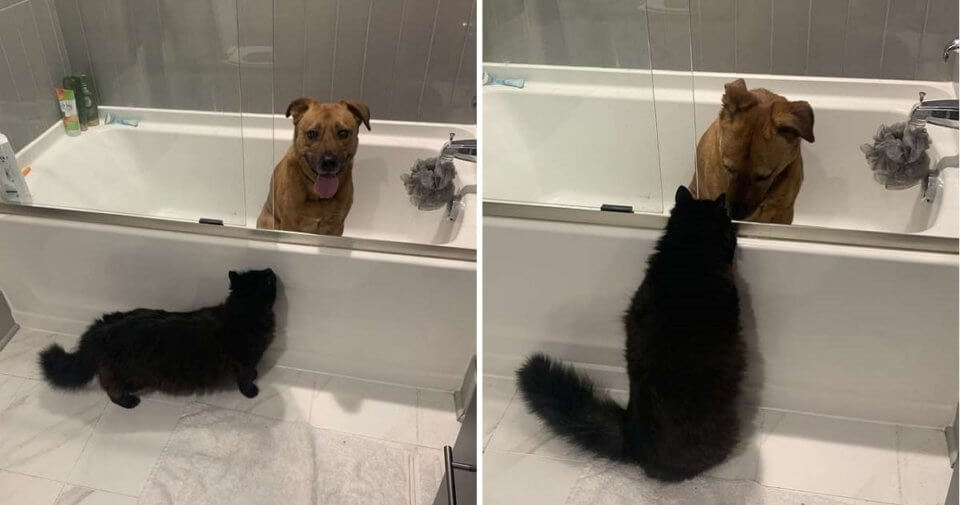 As pet owners, we know that thunderstorms can be a very scary thing for our pets because they are often frightened by sudden loud noises. All we can do during this time is try our best to comfort them and make sure they are ok.

However, when things get scary, there’s nothing better than having a good friend who will always be by your side to comfort and support you in hard times. Such was the case with a pittie mix named Moose and her best friend, a cat named Marvin. Mary Barnes, the two animal friends’ mom, rescued Marvin the cat six months ago. When she brought Marvin home, she hoped that the fearless kitty would become friends with her 7-year-old dog Moose.

“I didn’t know how Moose and Marvin would get along because Moose had never really interacted with cats, but she’s the absolute sweetest and most gentle girl so I had faith,” Barnes told The Dodo. “They very quickly became best friends,” she added. “Marvin has the personality of a dog so they nap and play together all day.”

Barnes’ two pets were happy and safe until she moved into an apartment in downtown Detroi. She started to notice that Moose was sensitive to loud noises. Whenever the pup heard fireworks or thunderstorms, she would find a place to hide, trying to find the safest place possible. “I try to give her treats and keep her busy when it’s storming but she usually ends up going into the bathroom and hiding in the shower,” Barnes said. “She’s always hidden in the shower — it’s her safe place.”

Although Moose and Mavin are best friends, Barnes never expected the loving cat would step up and comfort his nervous friend during the thunderstorms. “Last night was the first really big, long storm we’ve gotten in Detroit since Marvin has been with us,” Barnes said. “He was very curious and concerned about his big sister.”

It was clear that the cat knew her friend was suffering and he wasn’t going to let her be alone. “He went back and forth to her in the shower to check in,” Barnes said. “It distracted [Moose] from the storm for a little bit because she leaned down to give him kisses!”

Finally, the storm passed, and the two animals quickly got back to playing and relaxing together.