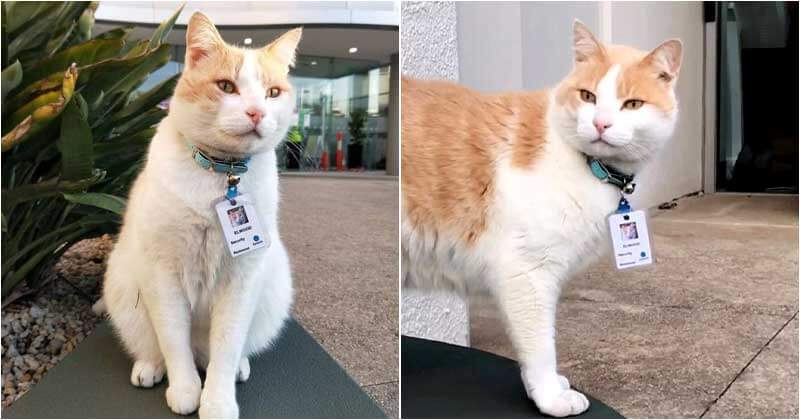 Have you ever seen a cat that can do human jobs? It sounds weird but actually happens at Epworth Hospital in Richmond, Australia. A cat who was hanging around a hospital for a year ended up getting hired as a security cat of the hospital grounds. Elwood (name of the cat) is now a friendly and dedicated worker in the hospital.

Here is the interview with Elwood’s colleague, Chantel Trollip on Elwood and his valuable work at the hospital. Let’s scroll down! Elwood is a red-white tabby. He has been seen (quite a lot, in fact) hanging around the main entrance of the Epworth Hospital in Richmond, Melbourne, Australia. Chantel Trollip, a Pathologist here at Epworth Hospital said that Elwood has been coming to the hospital to chill pretty much every day for around a year now. Elwood often enjoys his days either by “securing” the front, checking if everyone has some pets and attention to give, or catching some sun in the nearby bushes. You know, doing what a cat does best. And, this has happened for a year. One day, when Trollip was coming in for work, she noticed that Elwood is now sporting a collar with some sort of tag. Coming closer to him, she saw that Elwood has officially been hired as a security cat of the hospital grounds of the Epworth security team. “I first noticed his ID badge on him in June. I was actually having a case of the sads that day, but seeing his ID badge turned my whole mood around!” explained Trollip. “When I first saw him, he wasn’t wearing anything, so I assumed he was a stray. Then someone put a collar and tag on him and now most recently he’s got his own ID badge, which is identical to our actual staff badges down to the call codes on the back.” And, Elwood’s keen interest in keeping up public order at the hospital landed him a proper security guard job. Congratulations, Elwood! Amazingly, there are two things that he kept doing: securing the door making sure nobody enters without a pet tax, and lazing around in the sun.

“He is lovely and friendly, but not overly affectionate. He enjoys a good pat, but likes to keep things short and move around a fair bit. He is on the security team, after all, has to make sure everyone coming and going gets checked,” explained Trollip. As for where Elwood came from, nobody was really sure about it until recently. Since Elwood had the tag and nobody took it off, it was presumed he’s a stray, but as it turns out, he lives across the road with his real family and a twin brother named Jake. He just comes to the other side of the road (Erin St) every day for work. “He’s never really tried to get into the hospital, I think he’s too small to activate the automatic doors anyway,” elaborated Trollip. “There is a kidney dish from the hospital that someone has turned into a water bowl for him.” “Someone put a collar and ID badge on him, which is identical to our actual staff badges” So, now that he’s a part of the security team, we’ve asked Trollip how many criminal activities he’s been able to thwart so far. She had this to say:

“I think any potential criminals are thwarted by his sweetness when passersby see him! He has a very sweet chirp of a meow and I think anyone with any ill will would automatically change their plans upon hearing it and so I assume this is his way of getting the job done.”

Hiring cats to do human jobs is apparently a thing as also seen in the Order of Attorneys of Brazil, a bar association that has employed Leon the kitten after getting complaints of a stray cat wandering the premises. Well, instead of getting rid of him, they hired the cat and now he’s an attorney. You can read more about Leon in this Bored Panda article.

10+ Reasons You Should Fall In Love With A Cat Person

Man Doesn’t Want The Cat Becomes Fat, So He Did The Smartest Thing, And…Look The Cat’s Response

Meet Kazou, The Eyeless Cat Who Sees With His Heart