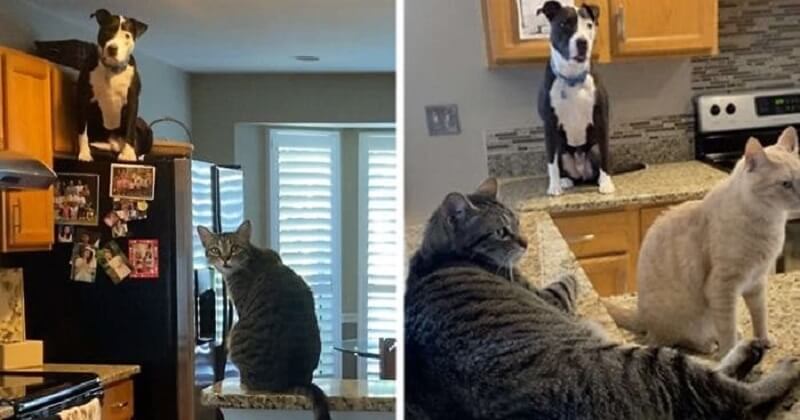 When Bethany and Samantha Castiller went to their local shelter to adopt a dog, they found a 2-year-old pit bull named Mako and decided to add him into their family. But in fact, they were chosen by this sweet and social dog. “We joke that we didn’t really pick him, he picked us,” Castiller shared. “When we went to the rescue shelter he had his back against the cage so we started petting him and he looked over his shoulder and gave direct eye contact and we just fell in love with the little guy. At the time, he looked like a bobblehead because his head was so much larger than his body, we just thought he was adorable.” The family brought Mako home and wondered whether he would get along with their cats, Pecan and Gizmo. Thankfully, the shelter assured them that Mako got along with cats really well, so they had nothing to worry about. “We initially kept the cats in a separate part of the house because we wanted to slowly introduce them to the new dog,” Bethany told Bored Panda. “He started jumping up on the small tables we had around the house and we thought he was just super excited and full of energy.” It wasn’t until they introduced Mako to the cats that they realized he kinda acts like them. Mako loves playing and hanging out with his feline friends every chance he gets. Carolina says she has never heard Mako bark, and he has even found a way of climbing cat-like onto the top of the refrigerator. “Whenever Mako sees the boys on the counters or cabinets he hops up to join them,” Castiller said. “He really just wants to be around the cats all the time. If he is not in the room with one of us humans, he’s with the cats.” Though they can’t know for sure, everyone thinks Mako had grown up with cats in his former home, causing him to adopt their tastes and behaviors. He was probably already familiar with being around cats. So familiar, in fact, he even considers himself as a cat.

9.5 million views on tiktok! Celebrating with lots of treats! Thanks for all the support! #fridgepup #pupagram #weirdpet “We went online and found a dog toy that looks like a cat one so we go to the backyard and he chases and jumps after it like the cats,” Castiller said. “He also likes to lay on the tables with my cats and look out the window at the birds with them. When he sees one of my cats lay on their backs for a tummy rub he comes over and does the same thing!”