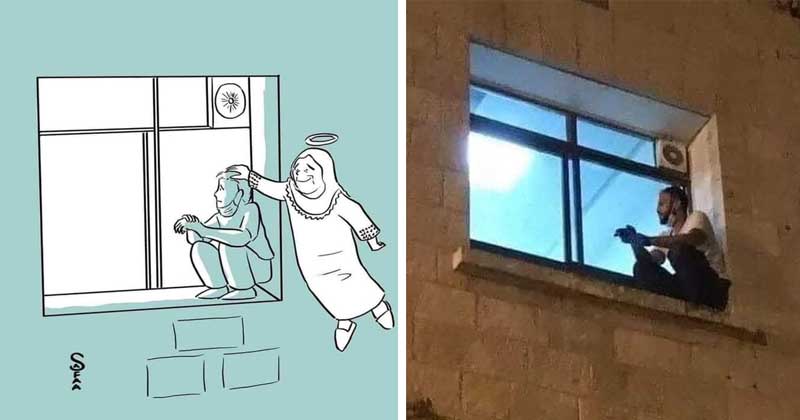 The world has been facing the complex situation of Coronavirus. In Palestine, there are 9,587 confirmed cases to this day. And, a young man named Jihad Al-Suwaiti had to say goodbye to his infected mother. But his story- the journey of staying beside his mother until she goes has inspired all. His elderly mom was admitted to the hospital for testing positive with the virus. But the man was not allowed to visit due to safety reasons. But 30-year-old Jihad from Hebron would climb the pipeline of the hospital and sit outside the window day and night to make sure his mother was well and safe. So close yet so far. A hospital official commented: “He spent most of his day there, observing his mother’s condition from outside the window, before coming down when he was convinced that his mother was fast asleep.” Until, last Thursday, his mother Rasma Salama passed away. The heartbreaking image of the young man watching over his mom fighting the virus was shared by Mohamad Safa and has since gone viral on social media, touching people around the globe.

Jihad did best that he could when his mom fell ill with Covid-19. He spent spent every day by the hospital window watching her fighting the virus.

Jihad’s brother Abang Jihad, Rasmi told the media that his brother remained stubborn and despite being banned from entering the hospital due to security reasons, he would’nt give up his hope- part with his mother.

“The mother had leukemia and was diagnosed with COVID-19 a few weeks ago,” Abang added.

Mohamad Safa has also made a tribute illustration to Jihad and his deceased mother. Jihad is the youngest child of his family. He was very close to his mother. When he was informed that his mom had passed away, he felt angry and in disbelief. “But now he seems to be able to accept the statement,” his brother assured. Many felt deeply touched by this heartbreaking story

Meet Tim Ballard, A Loving Father Of Nine And A Former Homeland Security Agent Who Has Saved Over 1,600 Children From Sex Slavery