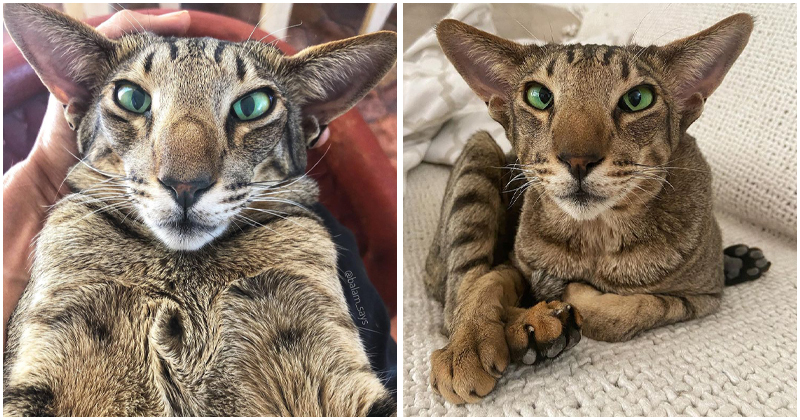 If you are in the mood for some adorable yet touching animal story, this inspiring cat has you got covered. Meet Balam, a talkative Oriental Shorthair whose voice you can hardly forget! The little survivor almost lost his life when he was a kitten and is now helping many other unfortunate felines in Mexico through his Instagram page. Balam and his brother Chaska were severely ill they first met their new mommy Phaedra Barratt. The kind-hearted woman took care of them all day and all night in the hope that these tiny babies would recover soon, but to be honest, she wasn’t really optimistic about their conditions.

“When I first got Balam and his brother Chaska, they were very, very sick,” the woman recalled. “Both cats had rhinotracheitis ringworm and roundworm. At some point, I didn’t think Balam would make it.” However, the two siblings managed to thrive beautifully under her care somehow. They quickly became perfectly healthy cats within several months and Balam got a really special way to express his love and gratitude toward their savior. “It was about when Balam was six months old that he started talking for the first time,” Phaedra continued. “I still remember where I was sitting when I heard him meow outside my bedroom door. And I thought “Whoa, what a voice?” and, well, he just hasn’t stopped talking.”

Balam is currently living with his brother Chaska and three other rescue cats Roo, Oona and Zog. Each of them is incredible in their own way, but Balam has always been the leader of the gang as well as the center of the house. The more Phaedra gets to know Balam, the more she loves this tabby boy. He is really smart, sweet and cuddly. Every time Phaedra askes him a question, he could answer within a few seconds.

“It’s an honor to know him,” Phaedra said. “He’s absolutely ridiculous. He loves, loves, loves his family, and we love him back.” Thanks to such a distinctive voice and endearing personality, the charming cutie has become a huge star on Instagram who has racked up over 279k followers so far. And what is the best way to make the most of such fame? Helping others, of course.

“As time has gone on and his page has evolved, I decided that the most appropriate use of my platform was to help other animals as much as possible,” said Phaedra aka the founder of The Balam Foundation. “Through Balam, I have raised money for sterilization campaigns. I’ve helped raise money to feed poor starving street animals.” You can listen to Phaedra talking about her dear boy here:

Please share Balam’s heartwarming story with your loved ones!

17 Cats And Dogs Who Are So Proud They Have Best Brothers, Friends And Family

20+ Photos Proving That Animals Are An Infinite Source Of Amusement