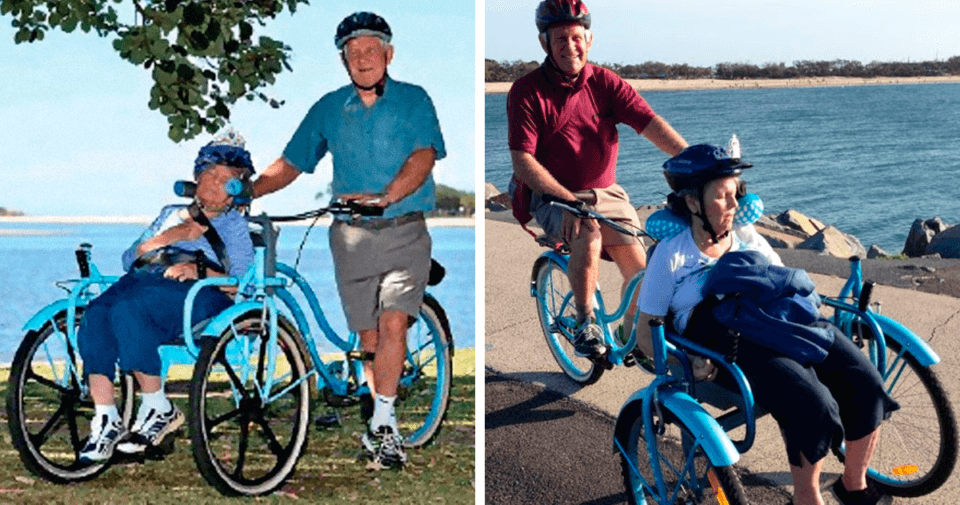 Love still exists in our life. A little action with love, sharing, and compassion may change one’s life forever and inspire millions. While some consider it cliché, others have a different experience and take these statements for facts. The story below will warm your hearts. It’s a beautiful love of Bill to beloved his 50-year-partner who has been experienced with Alzheimer’s.

Bill and Glad Forward have been married for over 50 years. And of course, they have been challenged by many things, including an unfortunate turn of events back in 2004 when Glad’s health started to decline at an alarming rate and she was diagnosed with Alzheimer’s disease. The couple has spent much of their time outdoors, primarily cycling. Bill reminisces that bikes have played an important part in their lives, and with Glad no longer as mobile as she used to be—so much that she now has great trouble walking on her own without falling over—it seemed that their outdoor activities were over. However, that man was not going to give up, swearing that he would do anything for his wife Glad. He finally came up with an idea to have a special bike built, one that could accommodate a person who is incapable of the mobility a regular bicycle would require. Then the “bike chair” comes. It’s a play on the words “bike” and “wheelchair.” As living overseas for years, Bill was greatly inspired by the inventiveness there, which led to the creation of the bike chair.

That man came up with a draft design and shown it to his friend Ken McKenzie to build. It soon became reality and the result was the functioning bike chair that you can see pictured here: an old-school baby-blue bike (in Bill and Glad’s case, at least) modified to have one wheel on the back and two wheels on the front with a chair, a seat belt, and leg rests equipped between them. Mobility was one of the things that suffered the most in her, but Bill had an idea for saving their passion for biking

“When we first started dating, I used to ride my bike from where I lived to where she was, and that was about 5 kilometers, on a Saturday afternoon, ‘cause that was the only chance we had to get together,” Bill explained in a video by CVCNow. The video follows the daily struggles of Bill and Glad in the shadow of the disease. However, despite this setback, Bill does everything for his wife, “from the moment she wakes up until the moment she goes to bed,” and he sees this as an honor to be able to return his love for all the care and love Glad showed him throughout the years: The 50-year couple continues to share rides through the local parks and beaches with Glad in the front and Bill in the back. They get struggles yet get joys, too. You can see wholesome and heart-wrenching photos in here. “I don’t count it a burden whatsoever, I count it a great privilege to care for this one I have loved all these years. She’s my princess and I’m her William and I wouldn’t have it any other way,” Bill said. He continued: “I used to ride everywhere on my bike, and Glad had her bike as well, and we’d put a bay chair on the front of her bike, so we carried our babies around on the bikes. Bike’s been part of our lives, and I guess that has something to do with this now.”

Since that day, the Bike Chair Team was formed, which has over 27,000 followers on Facebook. The team is attempting to develop a safe and sturdy version of the Bike Chair to be provided to those with mobility problems.

This article would be something that reminds you of love between husband and wife. It is the move that helps you get over the tough time and move forward.

Even Though Brodie Got His Face Disfigured and Partially Blind As A Baby By His Mother, Today He’s Trained To Become A Therapy Dog

Black Woman Chased The Homeless Man Who Was Begging For Food