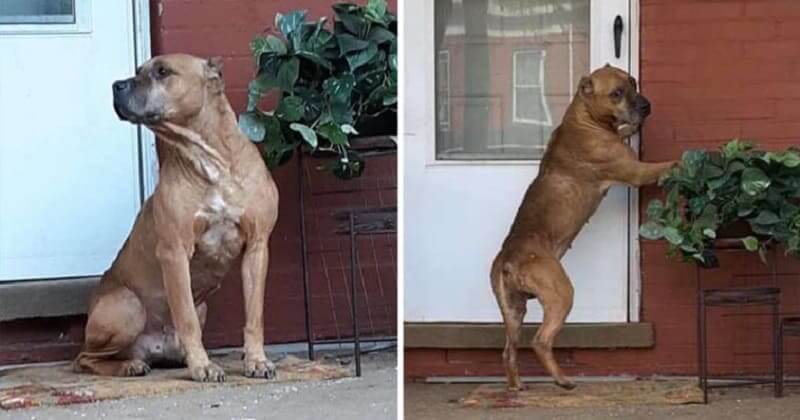 Dogs provide us with unconditional love and great companionship, so it is heartbreaking when people return their love with selfishness and callousness. They heartlessly abandon their dogs, mercilessly throwing them out to fend for themselves. Cupid, a cute and loyal dog from Harrisburg, Pennsylvania, was abandoned by his beloved family. The family moved house and didn’t take him with them. They drove off and left Cupid behind, wilfully ignoring the heartbreak and confusion he was suffering. Without any food or water, he went around to find something to fill his empty stomach. But no matter where he went, he would always get back to his house’s front porch. He refused to believe that they had abandoned him and hoped that they would return and take him with them. The distressed dog spent weeks sleeping on the porch and hopelessly waiting his owners. When local neighbours saw him, they contacted Janine Guido, founder of Speranza Animal Rescue, to rescue him and help him find a home. “All I was told was that his owners moved out and left him behind,” Guido told The Dodo. “I asked multiple other people if they knew anything about the dog and they just said, ‘They moved out.’” Guido rushed to the address and brought Cupid to safety. At first, the dog was scared and would not let Guido come close to him. He instantly ran away to his family’s porch and began frantically scratching the door, asking to be let in. Even though she gave him some food, he refused to trust her. That is until Guido comforted and calmly told him that everything is going to be okay. “It sounds dumb but I swear he knew what I was saying to him,” Guido said. “He literally came over and sat down and allowed me to leash him.” Now, Cupid is slowly getting accustomed to his new environment at the shelter, but he is still confused and hurt about the loss of his family. Soon, he’ll be ready to start looking for a forever family and a good owner who deserves his love and is willing to return that love. All dogs deserve to be loved and cared by good humans, so it is sad to think about the fact that many dogs have to live with irresponsible, selfish pet owners. However, we are happy to know that there are many wonderful people, like Guido, who are trying to make sure that these poor animals get the love and care they truly deserve.

Do you love this story? Feel free to share it with your friends and family members!

Abandoned Puppies Happily Came Up To Greet Rescuers In The Rain

Dog Is Caught Red-Pawed Stealing Carrots In The Garden