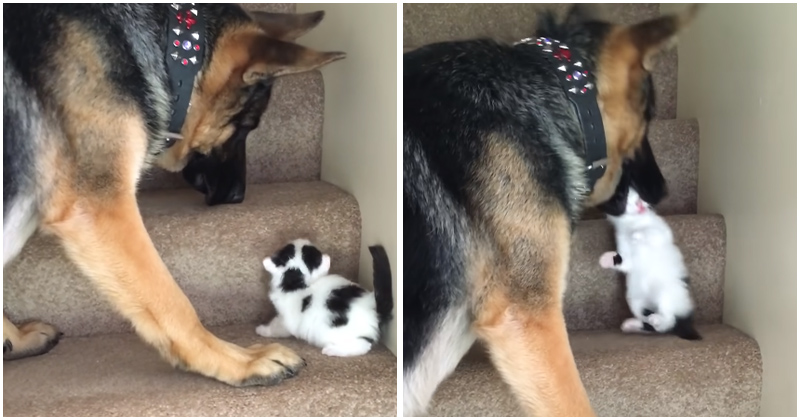 Everyone needs a loving companion at some point in life, and so do animals. When their parents are not around to do the job, they won’t mind a helping hand from a faithful friend.

Moo the little bicolor kitten is a cute floof who was fostered by an amazing family, where he got the chance to live under the love and care of a German shepherd named Tennyson. In fact, Moo wasn’t the only foster cat in the house back then, but Tennyson the big brother still cared about him, a lot. And even though they often say cats and dogs are mortal enemies and how this world is divided into cat people and dog people, this unlikely duo is still here to prove that they have been totally wrong.

It’s no secret that climbing the stairs is one of the first important lessons that both humans and their pets need to learn in their lives, and luckily the tiny Moo already had Tennyson there to help him go through his mission. Their amusing moment was caught on camera and it had won the hearts of so many dog and cat lovers around the world!

In the video, the sweet doggo was climbing up really slowly at first, while little Moo hopped clumsily behind him. Tennyson was unable to keep his eyes off his smol friend, he always stopped and looked back after a few steps to keep track of the cat. And when baby Moo seriously had trouble catching up with Tennyson, the kind dog simply decided to carry the kitten up on his own.

The only problem was, the poor dog couldn’t pick up Moo by his nape, so he just grabbed his whole head instead! And although his owner made it clear that he should let the cat do his job, Tennyson was so determined that he needed to help his friend out. The situation was a little bit awkward, but Tennyson was so sure he wouldn’t hurt that tiny kitten.

Let’s take a peek at the hilarious scene:

And in case it isn’t enough, here is another heart-warming video of the adorable pair:

Aren’t they lovely? Please share their story with your friends and family!

An Abandoned Puppy Found With Back Legs ‘Sawed Off’, Three Women Charged With Cruelty To Animals

10+ Animals Who Can Pose Better Than a Selfie Queen