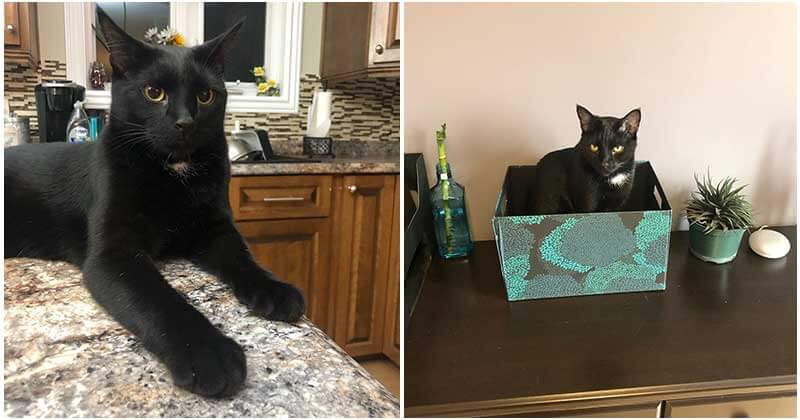 If you think that cats are just selfish and aloof creatures who only want to eat, sleep and clean themselves, we are sure that this story will change your mind about them.

Meet Joey, a black cat who was adopted from a rescue group in Toronto about 2 years ago by a good family in Newfoundland, Canada. He saved his owners by waking them up when the slow cooker caught on fire in the middle of the night. Scott White, Joey’s owner said he went to bed on a normal night after preparing a slow-cooker meal. “We went to bed around midnight and it was fine,” White said.

A few hours later, Joey went to White’s bedroom and woke him up with a paw on his face. “Usually, Joey doesn’t bother us when we sleep, but I could sense him pacing around the bed and I woke up with a paw on my face,” White told HuffPost. Sensing something wasn’t fine, White got up and smelled smoke coming from the kitchen. As he got closer, he discovered that the kitchen was filling up with smoke from the slow cooker.

“There was a lot of haze in the kitchen, but not enough to alert the fire alarm about 20 feet away,” White said. But luckily, Scott turned off the pot before any damage was done. White and his fiancee were pretty happy with their cat. He woke them up with enough time. If they hadn’t been alerted, it could have definitely been a different result.

And in order to express their gratitude and appreciation to Joey, the duo shared the story on their Instagram page with caption, “My name is Joey and I’m the Hero that saved my family from a smoking crockpot.” Joey is a hero, and he deserves a medal for his rescue. If you love this sweet story, please share it with your friends and family members! We hope that this story will change your mind about cats, especially black cats.

25 Silly Cats Who Have No Concept Of Cat Beds

24 Moody Cats You Definitely Don’t Dare To Mess With

10+ Incredibly Useful Skills Only A Cat Owner Would Know About

These Before And After Photos Of Kittens Are Just So Purrfect

Cat Miraculously Survives After Being Buried In Rubble For 32 Days