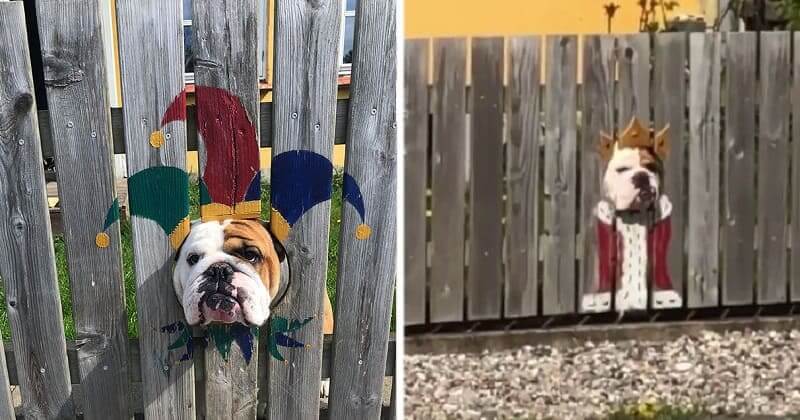 Recently, a bulldog became an Internet sensation after someone filmed and shared a video of the dog watching the street through a hole in the fence that was painted costumes. The video has gone viral and gathered thousands of likes and shares. Internet couldn’t get enough of the dog’s cuteness, so they decided to seek his identity. Finally, everyone found out the cutie in the video comes from Gråsten, Denmark and his name is Bogart! Bogart’s owner, Ranveig Bjørklid Levinsen, reshared the viral video on her social media page. She never expected that her bulldog would go viral and become a famous dog. “I, myself, am blown away that my little dog has gone viral—just because he looks goofy,” Levinsen said. This short video turned Bogart into an online star:

“He is a 4-year-old English Bulldog, almost ‘homemade’—we have his mother, Winston (she doesn’t care about the male name),” Levinsen described Bogart. According to Levinsen, Bogart is a pooch who loves watching people pass by his home and the street through the holes in the fence. For this reason, she decided to do something entertaining in the hope of bringing joy to everyone. “We are living close to a walking path, so many people pass by every day, and the dogs are just so curious,” the owner explained. “To prevent them from skipping the fence, we made the holes, but even if it was funny to see them from the other side, I just thought it would look even [funnier] if we painted something,” she shared how the paintings appeared on the fence. Levinsen came up with the idea, but the actual paintings were done by her daughter. After getting fence paintings done, they were amazed by the result and the response of everyone. The first is a joker style costume. The other has a more regal vibe… Since Bogart’s video went viral, he and his mom are now recognized by random people walking by his house. “It’s been a constant response,” Levinsen said. “I think people love it because it’s real. Plus, the dogs look so goofy,” she said. What are your thoughts on this story? Let us know in the comments and don’t forget to share this post with your family and friends!

Homeless Man Reunited With His Lost Dog In Heartwarming Video