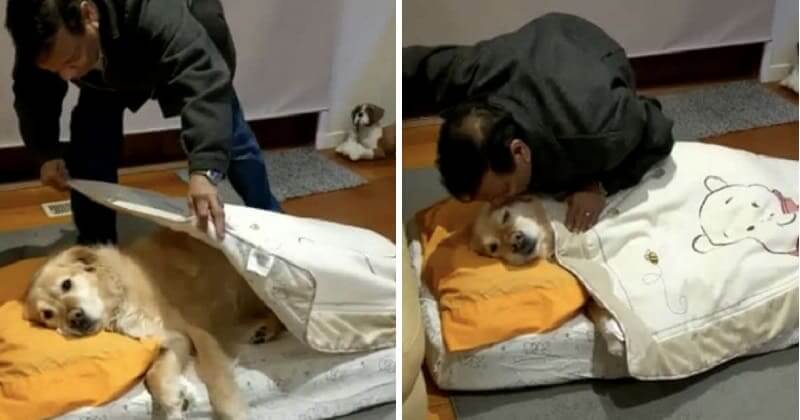 When you want to add a dog into your house, you may think that you need to do a lot talk to your father or your husband because they are sometime so hard to convince of something. However, we have to warn you that you need to beware because there is a risk that your beloved dad and husband will love them more than you do! Despite loving dogs, Rachael Rodrigues couldn’t own one as her parents didn’t like them. For this reason, when her parents gave her a dog named Oliver as a graduation gift around seven years ago, she was so happy and also a little surprised. “Both my parents were very anti-dog, as we’ve always had cats and they were hesitant with the additional work (training, walking, grooming, etc.) that comes with a dog,” Rodrigues told The Dodo. Rodrigues quickly bonded with Oliver, and now they become inseparable. However, Rodrigues is not the only one who loves Oliver. Her parents, especially her tough dad, fell in love with the dog as well.

Just my Dad and his dog

“Dad was smitten from the start,” Rodrigues said. “He’d often walk around the house just carrying Oliver around. In the first week that we got him, we thought Oliver had a stomachache and wouldn’t sleep through the night, so Dad slept on the floor with him under a blanket and rubbed his stomach the whole night.”

The whole family knows how much he loves Oliver, but he hates to admit it. He always treats and cares for Oliver as if the dog is a toddler. Whenever Olive naps, he covers him up with a blanket and tucks him in – and it’s definitely one of the cutest and sweetest sights in the world. “Oliver was asleep on Dad’s pillow so Dad thought he’d cover him up too,” Rodrigues said. Although he said he never wanted a dog, he now loves Oliver and can’t live without this furry kid. And of course, Oliver also loves him so much. “The video is pretty much what Dad and Oliver’s relationship is like — Dad treats him like an absolute baby (even though he won’t admit it) and Oliver laps it all up,” Rodrigues said. If you love Oliver the cute dog, you can follow him on his Instagram to see more his photos and videos! Our dads, boyfriends, and husbands may say they don’t like dogs and don’t want them around. They act tough and talk tough, but they secretly love these furry friends.

Do you know of any examples of how the love of pets has melted the hearts of strong men? Please let us know in the comment section below! Don’t forget to share this post with your friends and family members!

Golden Retriever Plays And Sings Along To Wind Chimes Every Day

Paralyzed Kitten Who Stays Little Forever, Loves To Be The Center Of Attention