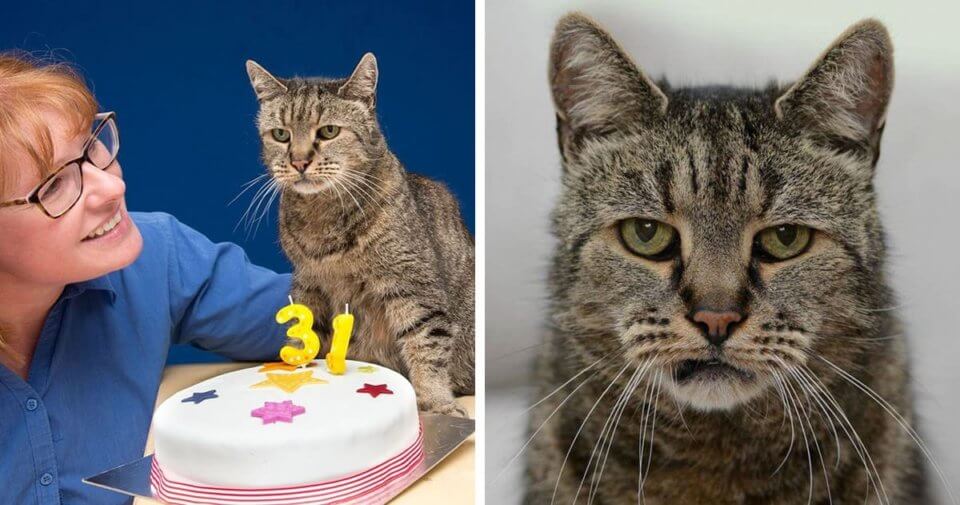 This tabby kitty, who is a contender to be the world’s oldest cat, actually celebrated his 31st birthday (which is the equivalent of 141 in human years). His name is Nutmeg and one day, he chose his humans by showing up in their backyard some 26 years ago.

”He rules the house and he’s absolutely gorgeous,” Nutmeg’s humans explained to The Mirror.

Loving owners Liz and Ian Finlay lovingly took the cat in back in 1990 as a stray who befriended their own cat Spice. When they brought the kitty to their local Cats Protection to treat Nutmeg’s abscess on the neck, they stated to the owners that the cat was at least 5 years old.

This would rightfully make Nutmeg the oldest cat in the world, but to qualify for Guinness Records, the owners have to show the documents that prove his age – and that’s quite tricky, however, they are working on it.

Just last year Nutmeg suffered from a very serious stroke, however, now he is up and going stronger, making those around wonder how many lives this cat has.

“He is not our cat, we are his humans and he never lets us forget that. Maybe that is the secret to his long and happy life.” “He rules the house and he’s absolutely gorgeous” However, to apply for the Guinness World Record, The Finlays need to show official documents Nutmeg is a very senior cat indeed, however, to the Finlays he is simply the pet they adore Just last year Nutmeg suffered from a serious stroke, but thankfully, now he is up once again… … Making us wonder: how many lives does this cat have? SHARE this adorble cat for your friends and family if you enjoyed it!!

10+ Cats Who Are Struggling To Figure Out This World

Artist Photoshops Cats Into Food, And The Results Are So Cute (30 New Pics)

Couple Adopts Cat From Shelter, The Cat Hugs Them And Won’t Let Go

Little Kitten Struggles To Survive After Being Bitten By Big Dog