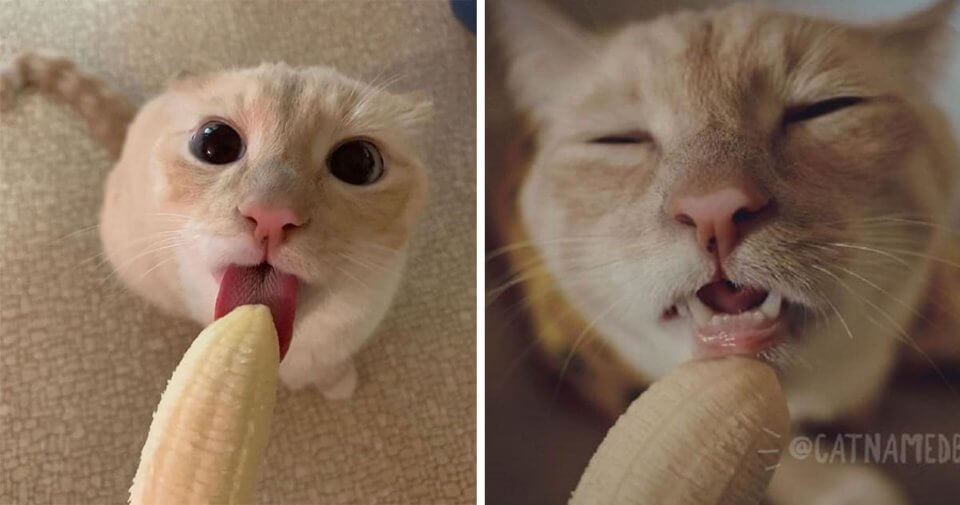 Cats. They are so full of fur, love, and unexpected silly wits. Many of them have such a big personality that drives us to crazy laughing. You may have seen lots of cats in your life. But what about a cat obsessed with bananas? Meet Bean. This kitty is a rescued catto living with his owner and three feline brothers Pirate, Ninja, and Raptor. When he was abandoned, the little neonate was helplessly alone in a dark and cold yard. Bean’s owner never expected her cat would grow to have an obsession for fruit. The first time Bean encountered a banana, he sniffed and ended up loving the fruit. Because it’s unhealthy for a cat to consume banana on a regular basis, Bean gets to have a few chunks once in a while. But the funniest part is that Bean’s mom has recorded a number of videos of him licking the banana. She said it looked so inappropriate and hilarious at the same time. However, banana is not the only thing Bean loves. The cat isn’t picky about his food. He can savor from Noosa Yogurt, scrambled egg, to veggies like Brussels sprouts leaves and lettuce. With tons of his pictures licking bananas, Bean’s indeed got lots of followers on his Instagram. Bean is yet an affectionate kitty who loves to follow his momma like her second shadow. The playful “Beanana” harmonizes well with older cats in the house.