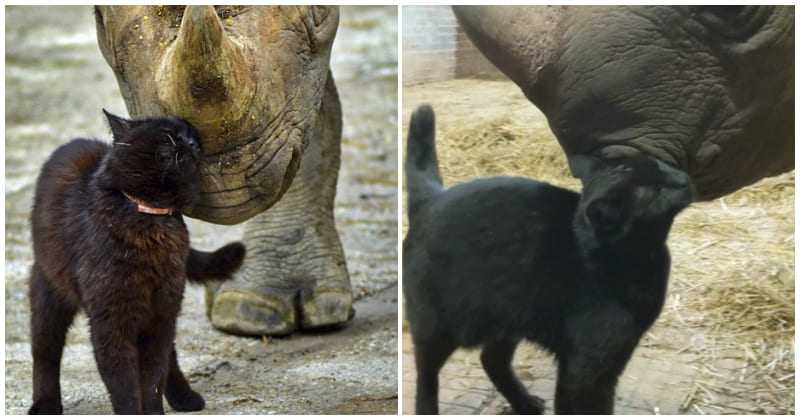 The friendship between species never ceases to amaze us. It’s one of the purest and most beautiful things in this world. Why? It blossoms naturally and beats off all the odds. A cat cuddles a huge rhino? It’s possible! This is a normal scene at Safari Park Dvůr Králové, a zoo in the Czech Republic. Mia (name of the black cat), along with other three cats, was taken in by the zoo to keep mice and rabbits away from the wild animal’s enclosures. However, Jan Žďárek who is responsible for placing the cats hoped that these felines would have some heart-warming encounters with the animals here. And this does happen. Mia has a special affection for a rhino named Emilka. The black cat loves cuddling her giant friend and can’t wait to see him every day.

Mia is such a brave cat! Her rhino friend is hundreds of times bigger than her. But the pair are still buddies. Emilka playfully plays with his tiny friend without hurting her. Actually, the black cat had an unpleasant run-in with another rhino before. She had the tip of her tail bitten off by a rhino when she was just a kitten. The zoo’s keepers thought that Mia would be obsessed with the rhinos, staying away from them forever. But the black cat proves that she has a sweet, heart-warming animal. She is still a cuddly little sweetie with the rhinos in the enclosure. The childhood accident doesn’t affect her ability to love. Many of us, humans, aren’t good at this, right?

The cuddling moments of the cat and the rhino was captured by Ami Vitale, a photographer & Nikon Ambassador during her visit to Safari Park Dvůr Králové. When she shared the video on the Internet, it went viral in an instant. The beautiful friendship of two animals inspires millions over the world. Survived Most Horrific Neglect, Heidi The Little Pony Proves That She Is A Fighter

20+ Cute Animals Who Melted Our Hearts With Their Beautiful Imperfections

Shaggy Mohawk And Stunning White Plumage Flecked With Black On Back And Wings, Crested Kingfisher Is Worth Attention