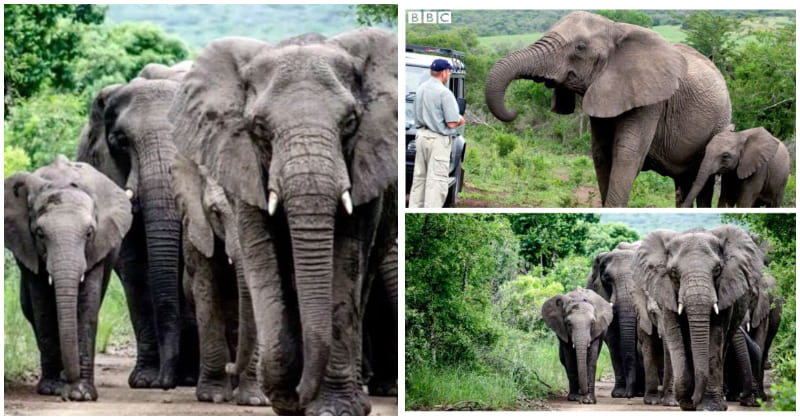 If you ask me which animals are the most intelligent and affectionate on the planet, my answer will come to elephants. They are adorable kids in the shape of giants. They sense the love and kindness of people around them and make sweet, heart-warming responses. Animals deserve to be loved and respected by humans. They are the most loyal friends and companions that we can find. The story of the elephant herd below certainly melts your heart. They marched for 12 hours to attend their human friend’s funeral, paying their last respects to him. The point here is no one told these elephants the passing of the man. They just knew it and made the 12-hour journey themselves to his house.

The respectful man is Lawrence Anthony, an international conservationist and founder of the Earth Organization. He and his wife, Francoise Malby-Anthony created the Thula Thula Game Reserve in South Africa that opened its doors to wild elephants. The great man spent many years of his life nurturing these huge intelligent animals. Lawrence got his special way to raise and care for the elephants. He treated these huge animals like children, using his words and gestures to make them feel safe when staying with him. This gave the man the title ‘The Elephant Whisperer‘.

Each elephant herd is led by an old female elephant. Lawrence believed he could connect with the rest of the elephants if he gained the trust of the leader.

Lawrence and his wife built a special bond with one Matriarch called Nana. The herd grew very fond of the couple, and they become close guests in their house. When Nana got the news of Lawrence’s death in 2012, she led her herd to his house to pay their last respects to their late friend. They walked for 12 hours to get there. They even stayed there, silent, for 2 days. It was not all. One year later, they made the same journey to mourn his passing. This is something science cannot explain.

It can be said that Lawrence is a special existence to the elephant herd. They weren’t informed of his death but still knew it and marched to attend his funeral. Lawrence passed away but his legacy still lives on in the Thula Thula Game Reserve.

Regarding Francoise, she has started various conservation projects including a Wildlife Rehabilitation Center and a Conservation Volunteer Camp since her husband’s death. For her effort in conservation, Francoise was awarded the French Abroad Award at the Ministry of Europe and Foreign Affairs in Paris in March 2019.

15+ Sleepy Pets Who Fell Asleep In The Strangest Places

25 Animals Whose Pure Emotions Could Melt Our Hearts Of Stone

Black And Yellow Broadbill, A Stunning Tiny Bird That Jumps Out From Cartoon Movies

Japanese Artist Turns Awkward Animal Moments Into Sculptures, And The Result Is Hilarious