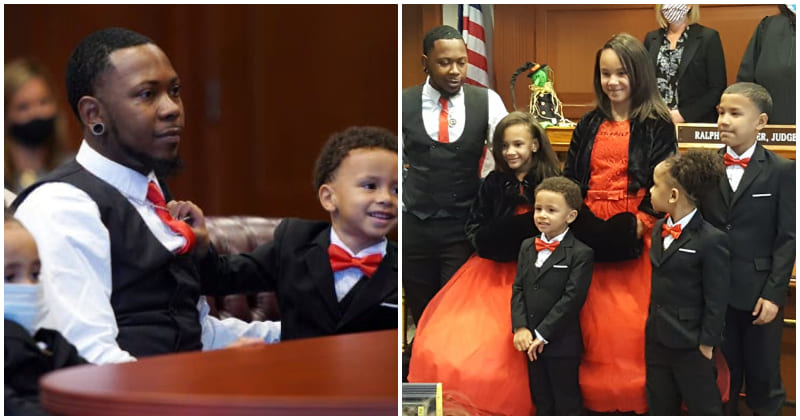 As siblings, we never want to live apart from each other. Orphaned children, however, in most cases, go to different homes after adopted, and sometimes don’t see each other for years. It is the most difficult experience that they need to overcome as a child. A man understands how tearful it might be. He adopted five siblings so that they could grow up together in safety.

Robert Carter began the road of fatherhood in 2019 when he adopted three kids Robert Jr., Giovanni, and Kiontae. They were biological brothers, but their parents also gave birth to two sisters, Marionna and Makayla. The truth was known to Carter six months after he started fostering three boys. That was when he had to make an important decision for all of them. “We met up for visits, and all the kids were crying,” said Carter “They didn’t want to leave each other, and at that moment, I knew, ok, I have to adopt all five.”

For further explanation, Carter admitted he had been under the foster care system with his nine siblings. The man didn’t see his youngest brother in 14 years (from the time he was two until he was sixteen). Therefore, he could feel how it was for fostered siblings to be separated from each other. To welcome his two daughters, Carter got a bigger home. On October 30, 2020, the family of four officially became a family of six. Telling Fox 19, Stacey Martin (adoption case manager) said she hadn’t seen a single dad adopt five siblings before. She admired the warm-hearted man who sacrificed himself to do the right thing. “Children need families, and it’s an opportunity for Mr. Carter to show the community that he can do it and others can too.”, she added.
Carter told WLWT “Every night I talk to them and let them know, ‘I’m your dad forever. I know what it’s like and I’m always here for you. I’m here for them no matter what.’” He is now happy that the custody process has been done, and he can just focus on his big-love family.