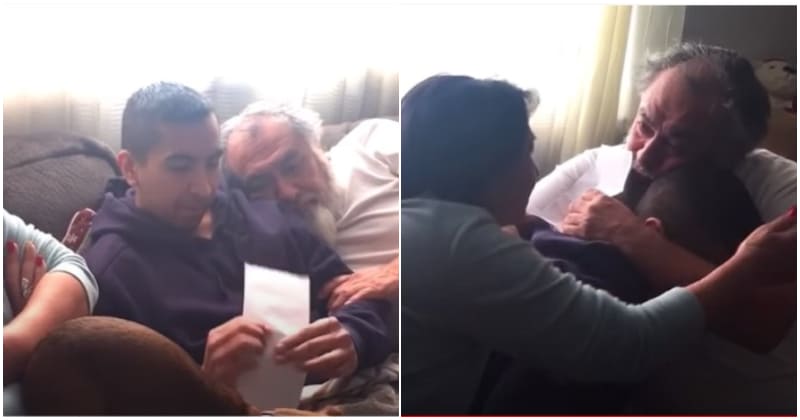 How do you celebrate X-mas with your family? For this guy, every Christmas is the same, but the one in 2014 was a bit more special with a surprising gift that he gave his parents.

Joe Riquelme was an app developer who had a big love for his mom and dad. In his video posted on Youtube, he filmed a short touching clip that captured the joyous reaction of his parents learning their house was paid off. At that time, Joe was sitting with his mom and dad on a couch while pulling out a dog-eared envelope, gave it to his mom and said “I have one more gift for you, for both of you”.

Riquelme’s mom seemed like she was not expecting too much until she saw what was inside. There were a bank receipt and a note “Your house is paid off. Merry Xmas. – Joe”. After seeing the note, she couldn’t hold back tears and became speechless with joy and surprise.

“I love you. Thank you”, she said to Jim, after calming down.

Riquelme’s father read the note, and his reaction was almost immediate as he started to bawl his eyes out with tears of happiness. All what he could say at that time was “Hijo?!!”, in disbelief. Then, the whole family proceeded to hug for a while.

Since 2014, the touching video has been viewed for more than 11M times and attracted 5K comments. Apparently, it was not the most expensive gift, but it was the best gift for his parents. It made their X-mas more memorable and meaningful.