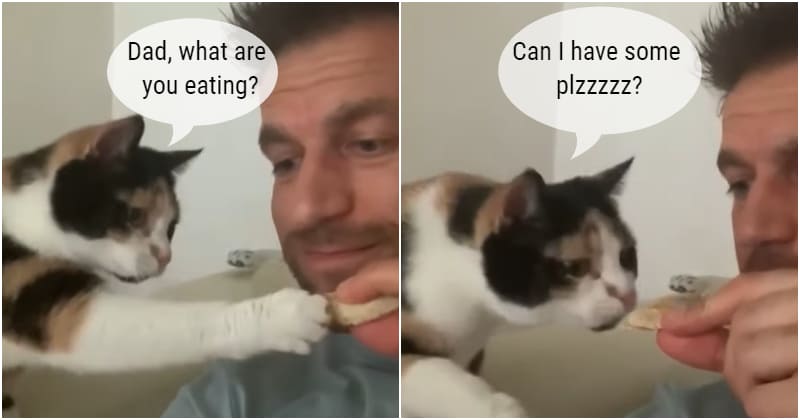 Cats begging for food is a normal phenomenon, especially around mealtime. It is also normal if you reward their behavior by giving them extra food or frequently feed them with people food. Can you remember your cats when they ask you for something to eat? These ‘bosses’ often become aggressive when they are hungry. They meow and look at us like they want to say “Where is the meal? It’ time for lunch!”, and refuse to stop making noise until they get food.

This clever feline has found an irresistible technique in asking for a piece of its owner’s sandwich. Her cute behavior was captured in a short video clip posted on Youtube in 2020. Watching the video, I promise your heart is not strong enough to say “NO” to her!

In the video, the little cat was sitting on a sofa with her dad when he picked up a piece of sandwich and started enjoying it. Of course, his beloved daughter wanted some. Unlike other cats, she quietly raised the little hand, touching the delicious food, keeping her eyes on it but at the same time, looking at the owner.

It was clear that she was begging for food, but the owner liked to see those lovely reactions for another time. He kept eating the sandwich until there was only a tiny piece left. The cat touched his shoulder, used up all of her cuteness to persuade him to give her the food. And finally, she won! The smart girl enjoyed her sandwich in happiness and pleasure!

30 Cats Who Look Like They Were Raised By Birds

Why Do Cats Like To Tuck In Your Bed?

25 Most Hilarious Cat Pictures And Memes Shared On Subreddit ‘MEOW_IRL’, You Might Laugh A Lot!