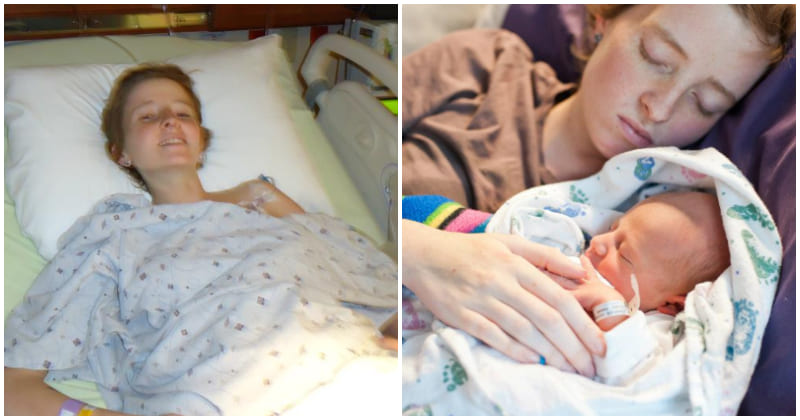 There is no love greater than that of a mom for her baby. Even a teen mom who has a strong desire to live is willing to stop her cancer treatment to save her unborn child. That is Jenifer’s situation.

Jennifer Lake, 16, was a sophomore at Pocatello High School, Idaho. On a normal day at school chatting with friends, she had a severe headache which sent her to a clinic. The doctors performed an MRI and were regret to say that Jennifer suffered from a tumor in her head. That was the most devastating news for a teenager full of belief and hopes for her life ahead. Jennifer collapsed in the helplessness of the doctors. As the tumor was detected after it had already spread to another part of her body, her chance to survive was slim. Jennifer’s parents, who are divorced, met the doctors privately to discuss their daughter’s condition. They were told: “Even with chemotherapy, the teen girl had 30% chance to make it two more years. And if she could make it, she probably couldn’t have children-the radiation and chemotherapy would make her sterile”

Then, an unexpected thing came to the girl, which made her happy and confused at the same time- she was 10-week pregnant with her boyfriend (Nathan). Jennifer’s option was limited, either her survival or the baby’s life. With the heart of a mom, the fierce young lady decided to deliver the baby, even though she had to stop with the chemo. After nine months, little Chad Michael was born. Jennifer’s mom, Diana Phillips, recalled the day of her grandchild’s birth, telling about what her daughter did after giving birth. “She grabbed the midwife’s hand and whispered: ‘I’m done, I did what I was supposed to. My baby is going to get here safe!'” Jennifer could spend only six days with her baby before passing away on November 21, 2011. She made the ultimate sacrifice that a mother could do for her kid. Jennifer showed no regret for her decision. The moment she died, baby Chad was in her arms. Since 2011, Jennifer’s story has been told and touched hundreds of thousands of hearts who have followed her destiny through social media. Her family and friends have always wanted people to think of Jenni’s legacy as a sacrifice rather than a tragedy. Now, Chad, raised by his father Nathan,  is a 10-year-old happy boy.  They know that Jennifer is always by their sides and in their hearts. Although it happened years ago, I am always heartbroken whenever I think of this story. Watch more about the story here:

Boyfriend Shaves Girlfriend’s Head, Then Immediately Shaves His Own To Show Support

Starving Dog Shows Gratitude And Love Towards Woman Who Rescued Him