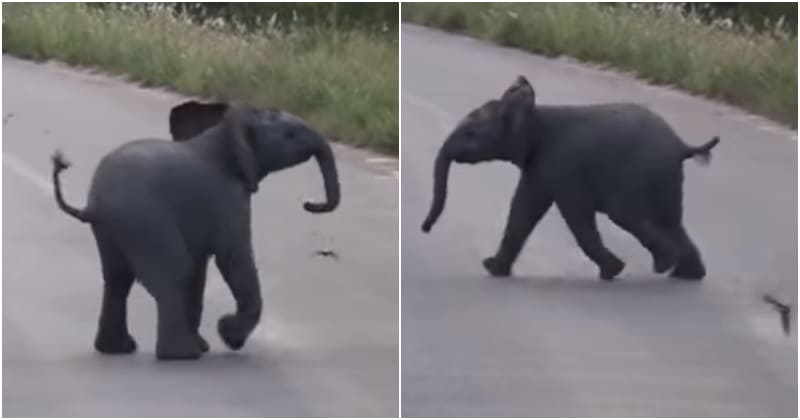 Animals can sometimes be seen doing funny actions. They can make super emotional facial expressions, do silly things like trying to catch their own tail, end up running in a circle, etc. That’s hilarious and relaxed to see them doing like that, especially when those animals are babies, just like our children.

The video below was filmed by a woman when she was on a tour at Kruger National Park in South Africa. On the way to explore the park, she accidentally spotted a baby elephant having fun chasing sparrows.

Elephant calves are definitely lovable with their chubby body and cute, clumsy action. Watching them playing around is no less delightful than watching our babies.

There, many sparrows gathered on a road, maybe they were looking for food but then, they unexpectedly got a friend who came to play with them. The baby elephant saw the crowd and couldn’t help but started the chasing game.

For a ground-dweller like this calf, playing with those flying friends was happier than anything, because he cannot fly. In the video, the young calf can be seen chasing the sparrows around and around. Those sparrows flew close to the ground, within his reach. Of course, those birds were not that easy to be caught, they, otherwise, did a good job keeping him busy.

This baby was simply too excited with so many birds around and couldn’t stop running after them. That’s understandable. Children are also in love with this game. Chasing a flock of pigeons or seagulls will bring about so much fun for them.

He ran around the road, swung his trunk back and forth. Sometimes he stopped to change the direction, then continued his game. Indeed, this calf was having a good time and burning out its excess energy. Baby elephants and baby human are much the same as they could grow up being playful and naughty.

After a while, he returned to his herd on the side of the road. Like parents, the adults in the herd just stood there watching their baby playing around. That’s so amazing.

The Kruger National Park in South Africa is famous for its unrivaled diversity of life forms. Besides elephants, there’re also lions, leopards, rhinos and buffalos, forming the Big 5. Here is also the home for hundreds of other mammals and birds such as giraffes, eagles and storks.

Stunning In A Shiny, Shimmering Reddish-Orange Feather Coat, This Bird Is Praised As A Living Gemstone Of The Forest