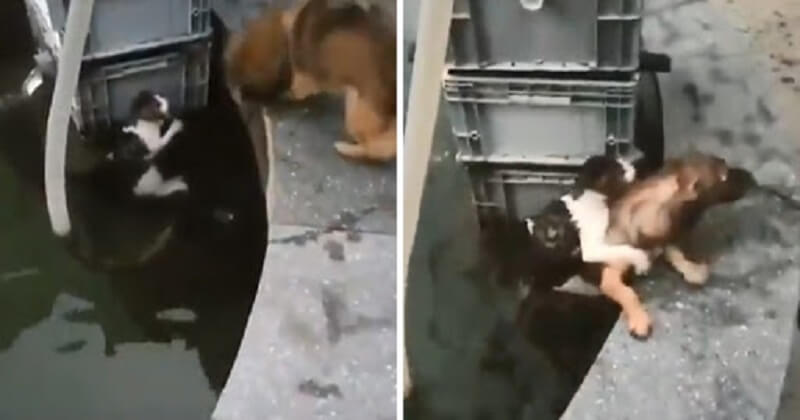 Although they have the proverb “Fight like cats and dogs”, reality proved otherwise. There’s many videos on the internet to prove that cats and dogs can be friends. And the video below goes beyond that. Not only does it show a cat and dog become best friends, but it shows a dog saves a drowning cat. The video shows a cat was about to drown in deep water and a brave pooch diving into pool of water to save her. The dog jumped into water, he carefully got under the cat and let her mount onto his back. He then took her out of the deep water and runs off to a safe place. After watching the video, some viewers on social media wondered why the heck the person who was filming didn’t stop to help them or whether the video was staged. She might take the cat out of the water and spare the poor dog all the trouble. However, some viewers think that the animals sometimes need to figure it out for themselves. Those animals worked together to solve a problem and now they are stronger for it.

Watch the video below to see the admirable pup!

Dog jumps in the water to rescue a drowning kitty ❤ pic.twitter.com/Rj3PQWiPWs

After 6 Years Going Missing From Home, Senior Dog Finally Reunites With His Family

Kind Dog Loves To Care For Injured And Orphaned Fawns

Little Boy Dresses Up To Help Save Street Animals, Thinks He Is A Superhero To Them