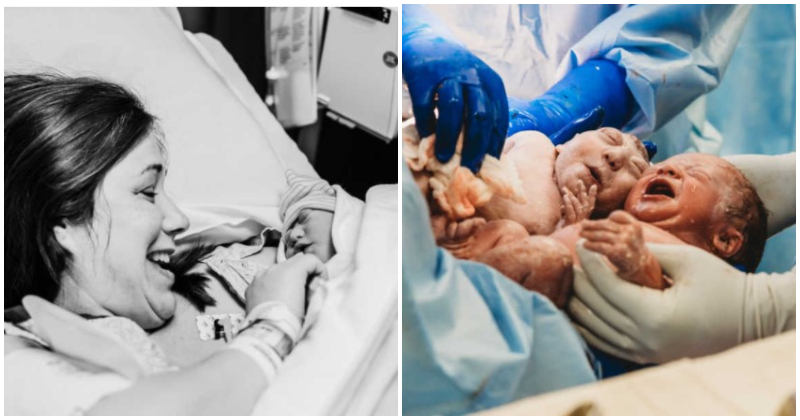 The special bond between a mother and her children is something sacred and irreplaceable. That explains why many moms can overcome painful contraction labor as long as their babies are born safely. But what if your baby passes away after birth? It must be heartbroken and difficult to think. That was Jessica’s situation. The pregnant mom used to be happy to have twins, but that happiness was too short. Jessica was informed that one of her babies got brain issues, which lowered her survival possibility up to zero.

Jessica had a five-year-old daughter, Hannah, who was always waiting for another sister. After six months of trying, Jessica cried happy tears to know that she was pregnant. But she wanted to inform Hannah and her husband (Matt) in a special way. After driving to DQ, going back and forth between shops, she bought a lovely gift card for Matt. “I know this seems like a nice gift for you, but you’re going to need it for all of the Blizzards you’ll be getting me for the next 9 months! You’re going to be a Daddy again!!” wrote Jessica. That night, Matt couldn’t hold back tears to know the news. But Hannah had to wait for another three weeks to hear about it. Jessica and her husband got her a book called ‘I’m a Big Sister’ and let her opened it. After reading the title, Hannah felt confused and decided to confirm what she was thinking of. “I’m not a big sister?!”-She said. Jessica told her “Yes, you are! I’m pregnant!”. Hannah got excited because she was going to meet her little sister soon.

Very quickly, Jessica started getting super sick. Nausea and headaches took 11 pounds out of her body in just three days. As Jessica felt nervous about her condition, she came to see the doctor two weeks earlier than the scheduled appointment. The ultrasound showed the reason why everything was going differently. She was a twin mom. Receiving the news, Matt and Jessica started to cry. That wasn’t what they had expected, but having two babies was the happiest thing ever. They were overjoyed and terrified – so many emotions at once. At week 8, they had another appointment with the doctor to find out the sexes. But after that, the result was told to Jessica’s mom. At Thanksgiving, she made a cake for the whole family to cut to see what they were having. The cake included two colors, first pink, and then blue. So Hannah was going to have a sister and a brother.

Jessica started to plan a nursery that the twin babies would share. She had been very excited until a terrible thing happened. On January 22, she had a last scan on the babies, and the result was not as expected. While the brother (Cameron) was growing normally, the sister (Camille) had anencephaly (a birth defect in which a baby is born without parts of the brain and skull). Her heart broke into thousand pieces, while her husband was shocked, confused, and disappointed. At that moment, they knew that they couldn’t have the baby girl. Hannah got to know about it days after. The little girl didn’t show her disappointment in the beginning, but at bedtime, she came to her parents and cried. She kept asking questions and crying about not being able to do Camille’s hair or play with her. Jessica and her husband broke down. They knew that Hannah loved her sister so much.

It was nearly impossible for Jessica to think that she would have a child whom she knew she would lose very soon. But as a mother, she understood that she shouldn’t stay in that low spirit for too long, as it could affect both babies. That was the only time she, her husband, and Hannah would have with Camellia, so they had to make memories while they could. Since then, Jessica made use of every moment Camellia could stay with her. At week 37, Jessica’s blood pressure was higher, showing that it was time to give birth. Although she was not ready to lose her daughter, she still couldn’t wait to hold the two angels in her arms. The doctors had to perform an urgent C-section for her so that Cameron and Camille were born. Immediately, Camille was put into her mother’s arms. She was almost gray (Jessica thought she was losing her daughter) but pinked up instantly. Jessica was happy, holding the newborn angel to her Matt, Mom, and Hannah.

Although Camille struggled to control her body temperature, she was still alive! All family members held and loved her for each second of her short life. That night, they couldn’t sleep due to the fear that the baby would pass away. It was hard for the whole family to feel both emotions; the joy of having two new babies and the sorrow of knowing they would likely leave the hospital with only one of them. Early in the next morning, Camellia started having slight seizures. Everybody could only pray for her life. Luckily, the little soul got over and stayed until the third day. She went at 5:24 AM on a peaceful morning on day three, when Jessica woke up and checked her in Matt’s arms. “She is gone”, Jessica told her husband. They hugged the little angel the last time, before calling the nurse in. They were grateful it happened peacefully. The nurse helped them to take hand and foot imprints, and bring back her outfit and a lock of her hair. Camellia had gone, but everyone would never forget her story. She was honored with a plaque by Mid-West Transplant, which was touching to Jessica and her husband.

Kind Dog Loves To Care For Injured And Orphaned Fawns