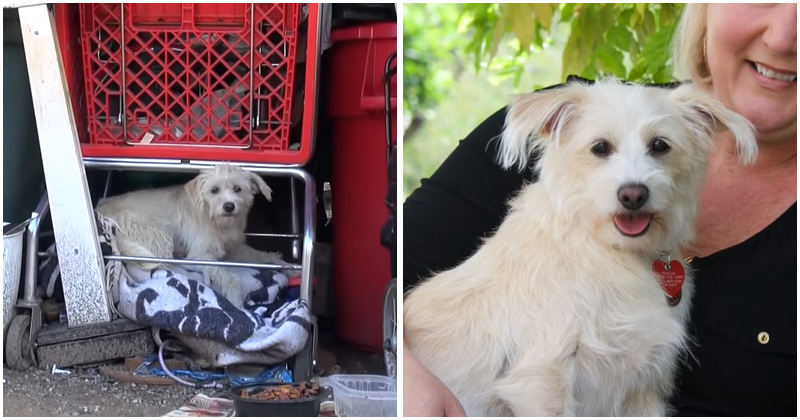 If you are in the mood for several sweet stories to brighten up your day, this touching rescue is right up your street. It’s about a stray labradoodle who used to wander hopelessly on the streets, but thanks to the kindness of the residents nearby and her rescuers, her life was changed drastically.

The poor dog lived under a shopping cart during her pregnancy. As an expecting mama, it’s no surprise that she was quite cautious and alert in front of any threat – including humans. So when the neighbors wanted to approach and check her out, she only growled at them aggressively. Eventually, they left some food and water there and called a local rescue for help.

Rescue From The Hart’s founder Annie Hart and her friend headed out right away after hearing about the pitiful doggo. That luckless girl was hungry and terrified. She did accept some treats from them, but she refused to leave her hideout. Understanding her worries, the compassionate rescuers took time to gradually gain her trust.

Thankfully, their effort was paid off. It didn’t take long for the two kind ladies to steal the adorable pooch’s heart. Once she started to calm down, Annie took the white dog home to take care of her herself. She was named Bailey.

Under her rescuers’ love and care, Bailey gradually went from a scared and doubtful stray to the happiest doggo on Earth. After a few weeks, she gave birth to a bunch of mixed puppies who looked completely different from each other!

Once the five pups were strong and independent enough, Annie helped both the endearing mama and her babies find their own loving home. Needless to say, all of the dogs were adopted out in the blink of an eye. Who could resist such charm anyway?

Please share this moving story with your friends and family!

10+ Dangerous Dogs Behind Those “Beware Of Dog” Signs (New Pics)

Surfers Spent 6 Hours To Save Crying Baby Whale From Drowning

20 Cute Dogs Who Are Perfect In Every Single Way