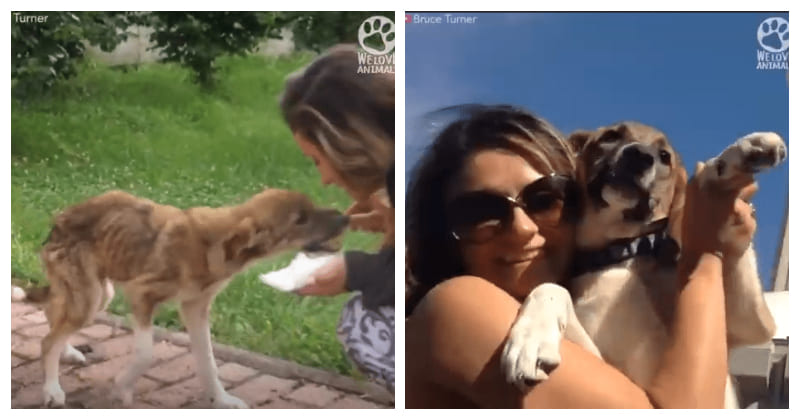 When the couple Bruce and Jen were enjoying their vacation in Macedonia, they spotted a homeless puppy faltering into their yard. The poor dog looked so skinny and weak. He couldn’t even walk on his hind legs. Shivering on his step, he slowly approached the couple. Touched by the little dog, the couple gave him some food; he finished it up quickly and then returned to the night.

The next morning, he came back all happy with his wagging tail. The couple was so happy to see him, too. They kept him well fed and gave him the love and affection he needed. Bruce and Jen then decided to name him Chachi, short for Cackalicia, which means toothpick, because he was so skinny.

They called the vet to check him out after few days, and the result was not so good. He had a damaged spinal cord and lung infection, luckily there was still time. The vet gave him medical treatments with antibiotics for his infection, vaccinated and microchipped him. To keep him comfortable, the couple moved him into their basement for better conditions and then started planning to take him with them back to Toronto, Canada.

However, things were not that easy. They received bad news from the vet that Chachi couldn’t go with them as he was still not well enough. That broke their hearts, and Chachi’s, too. Luckily, Jen’s parents stayed in Macedonia for 10 more days, they would take care of him while his parents were away. Chachi quickly recovered as the day passed and when it’s time, he was ready to fly.

After a long flight of 18 hours, Chachi arrived in Toronto. Separated for over a week, his parents couldn’t wait to take their boy home. It’s hard to say who would be more excited, Chachi or his parents at the airport.

Since then, Chachi has lived a life that he could never have before. He now has his own home with parents and a big brother to play tug of war. He is playful, highly energetic, and sometimes causes troubles, too. But he is loved by his family, unconditionally.

Although the damage in his spinal cord is permanent, it cannot prevent him from enjoying his life. Later on, he even manages to walk on his hind legs instead of dragging them along. What a strong boy he is.

The story received favorable responses online. “This made me and my grandmother cry. This is so sad and happy at the same time,” said NuggEZ. “I wish all the suffering animals have happy endings like Chachi!!!” – Alma Rohit.

Huge thanks to Bruce for sharing his story with us. To see the original video and get the most updated information about lovely Chachi, click here.

20 Adorable Dog Mix Breeds That You Will Go “Aww”