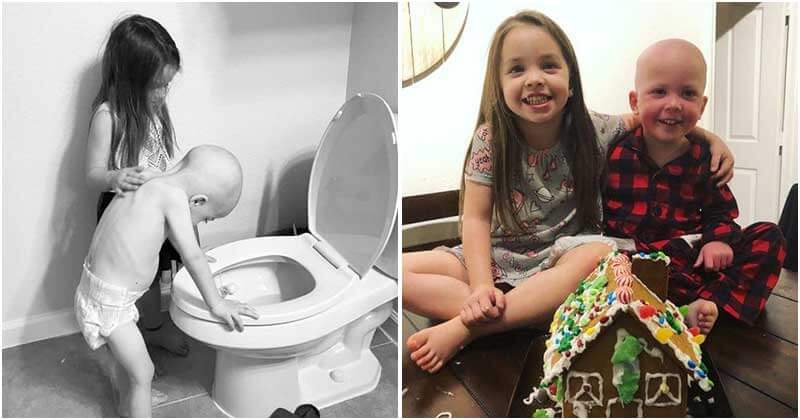 It’s priceless when you grow up with your siblings. You guys share a lot of adorable childhood experiences together and get mature. But what will you do when you have a sick brother or sister? Comfort and look after him whenever you can. This is the best thing you can afford to make them feel better. The story below surely touches the deepest in your hearts. Let’s scroll down!

A mother has shared a number of photos of her children on the Internet. These capture the heart-wrenching reality of childhood cancer.

In the most moving shot, 5-year-old Aubrey Burge is comforting her 4-year-old brother Beckett as he suffers with chemotherapy to treat leukemia.

The little Beckett lives with his family in Princeton, Texas. The boy was diagnosed with acute lymphoblastic leukemia at the age of 2 in April 2018, and has been having chemo since then.

His mom, Kaitlin started taking the pictures in January, showing Aubrey looking after Beckett, reassuring him, and rubbing him on the back while he’s sick over the toilet. I feel like something tighten inside when looking at these pics. Heart-breaking. Grow up healthily is such great luck!

Aubrey is actually 14 months older than her brother. But Kaitlin says the caring little girl then washed her brother’s hands, carried him to the sofa, and offered to help her parents clean up the bathroom.

But little Aubrey kept struggling to understand why her usually bubbly younger brother wasn’t his normal happy self.

“When he came home it was the day of her birthday, it was her first time seeing him since he had been diagnosed,” Kaitlin, 28, said.

“He was very petite, couldn’t walk and he’d lost a lot of weight. To her it was very odd and he looked different”.

“We weren’t really sure how to handle the situation or if we wanted her to know what was going on. But whenever he came home Aubrey was trying to work out why he didn’t want to play — it wasn’t like him.

“She wondered why he was sleeping all the time and needed help to the bathroom. He would just be sick and he’d never been sick before.

“She didn’t know what was happening, but she knew from experience that when she was sick, we would rub her back and help her through it.

“She just picked up from experience and took over. She’d rub his back and tell him it was going to be okay, clean his face up and wash his hands for him.”

Kaitlin says the little girl will even pass up opportunities to go and play with her friends in favor of staying at home to look after Beckett.

Beckett and Aubrey also have a younger sister named Chandler. Kaitlin says she’s always proud of the close bond shared by her children, but is concerned that Aubrey has been exposed to so much at such a young age.

However, she decided to share the images to prove the importance of family in difficult times.

“When I see them together, it makes me happy but at the same time it makes me sad,” Kaitlin said.

“They have an incredible bond. To this day, they are closer, she always takes care of him. A child that’s four or five years old should be outside playing with their friends.

“She loves gymnastics and we had to put a stop to that because of the financial burden, it got too expensive with his situation.

“She should be out doing gymnastics, running around the neighborhood with the kids, playing in the playground, swimming in the pool — but here she is taking care of her brother.

“They’re very close — they always played together. He’d play dolls with her and she’d play superheroes with him. We encourage her to go outside and do things, but she’d rather have her eyes on him.”

Kaitlin says 5-Year-Old Girl Aubrey is extremely interested in what her brother is going through, even though she can’t really understand.

“She’s watched a dozen doctors throw a mask over his face, poke and prod him with needles, pump a dozen medications through his body, all while he laid there helplessly,” the mother said.

“She wasn’t sure what was happening, all she knew was that something was wrong with her brother, her best friend.”

Doctors believe Beckett will have to undergo treatment for another two years, but the strong little boy will have Aubrey and his family supporting him every step of the way.

Teacher Lost Her 16-Year-Old Cat, So Her Students Surprised Her With 2 Rescue Kittens