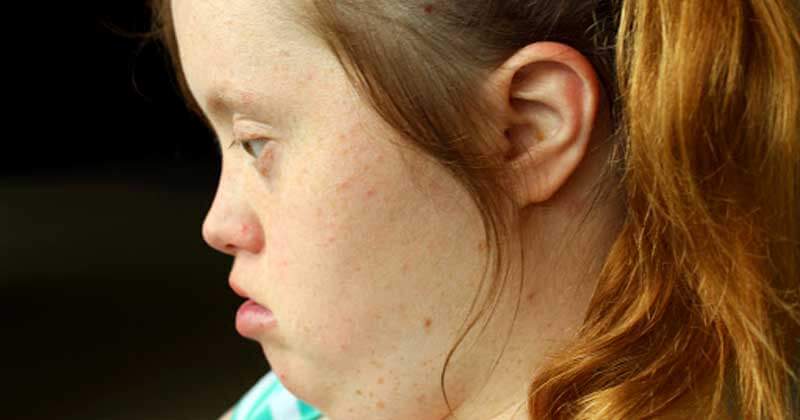 If you grow up with your special sibling, you will have priceless experience. You will be stronger and more responsible. You may be younger but may act like the older. You’re their forever defender. They were born less luckier than you but will live a happy life with love and kindness around them. These must come from their family, then the community. This story of a younger brother and his sister with down syndrome will melt your heart. Let’s scroll down!

The little a teenager girl (the size of a ten years old) with Down Syndrome made her way through the McDonald’s restaurant to the back and turned toward the restroom.

She stopped and looked closely at the word on the door to make sure that she was entering the appropriate one, she walked in.

This was a happy evening for her. She and her family had just come from the roller rink with a group of friends from her church, and although trying to stay in an upright position while skating had been more work than fun for her, she knew now that it was certainly well worth the effort. After all, was there any place in the world offering greater rewards than McDonald’s?

Her younger, but bigger, brother (and her defender) had sat quietly for a few minutes when she came in. He noticed something, that thankfully, she had not.

A group of four teenagers, two couples, had taken an interest in the little girl from the moment they spotted her. They continuously stared at her as she walked to the bathroom, snickering and whispering behind their hands, with one openly laughing, another pointing.

Her brother kept watching them for a minute or so. Then, slowly, almost wearily he left his seat and walked casually across the restaurant to the booth where the merry couples were sitting.

The two guys’ face turned pale slightly, and the girls looked a little alarmed as this total stranger — a year or two their junior — placed his hands boldly on their table, leaning down slightly toward them. They studied each other while he was clearly in their space, and while they were most definitely out of their comfort zones.

The teenage boy then stood up straight after several seconds and motioned with one hand for one of the couples to move over. He intended to sit right down next to them. Somewhat in shock, and thrown completely off-guard, they made space for him as he lowered himself and sat down, hunched slightly forward with his forearms resting on the table.

“I was watching you making fun of my sister,” he quietly informed them.

All four faces clearly paled and the boys stumbled over their words in their rush to defend themselves.

But he told them again, “I watched you.”

They started babbling whatever came to their minds, knowing they had been caught red-handed and maybe, just maybe, even realizing that they had been not only rude, but cruel to boot. Maybe they even got a little glimpse of the love this fifth wheel had for his sister, and an inkling of the emotions he was dealing with. Maybe.

The brother’s aim was not to listen to their denials as he turned and watched his sister head back to where she had been sitting with the church group. The four all looked away, making sure they looked absolutely anywhere other than that little girl.

Somehow, on her return trip from the restroom, not one of them found her the least bit amusing. Her brother watched her sit down with the others, then he slid out of the booth and stood. As he turned to walk away, one of the boys tried for one last line of defense. “Hey, we would not make fun of her. We feel sorry for people like that!”

The little girl’s defender stopped and turned back to their table, and placing the palms of his hands again on its surface. He leaned in close to his new acquaintances, and said hoarsely, “And I feel sorry for people like YOU.”

Then he turned and walked away. And somehow, he suddenly blended in with the Happy Meal atmosphere as he took his place next to his little sister — just as if he was your average, basic McDonald’s customer, and not a hero at all.

Tiny Stray Puppy Wags Her Tail At Every Passerby, Hoping Someone Will Adopt Her

This Real-Life Batman Doesn’t Save The World, He Saves The Lives of Shelter Pets